This plate is from around 1850 and the information states:
I did not expect that so fine a bird as the Cyanomyia violiceps
could have remained so long undiscovered in the comparatively
well-known country of Mexico; the merit of bringing it at length to
light is due to M. Salle, who obtained two specimens at Oaxaca, in
Western Mexico. In point of affinity, this new species is most
nearly allied to the Cyanomyia quadricolor, a bird which has
hitherto stood alone in its own genus for the purity of the uniform
whiteness of its under surface; but that character, we now find, is
equally shared by the bird here represented, which differs,
however, from its ally in having a larger and somewhat forked tail,
in the violet colouring of its crown, and in having a longer and
darker bill, which, moreover, is not so broad at the base.

One of the two specimens which grace my collection is either a female or a young bird (it is represented in the upper figure of the
accompanying Plate) ; this specimen differs from the male in not
having a trace of violet colour on the crown, in the tail-feathers
being reddish bronze, very slightly tipped with buff, and the
feathers indicative of youth among Humming-Birds, and there can be
but little doubt, therefore, that I am right in considering the
specimen in question to be immature. The Plate represents two males
and the supposed female, of the natural size. The plant is the
Cereus Leeanus. 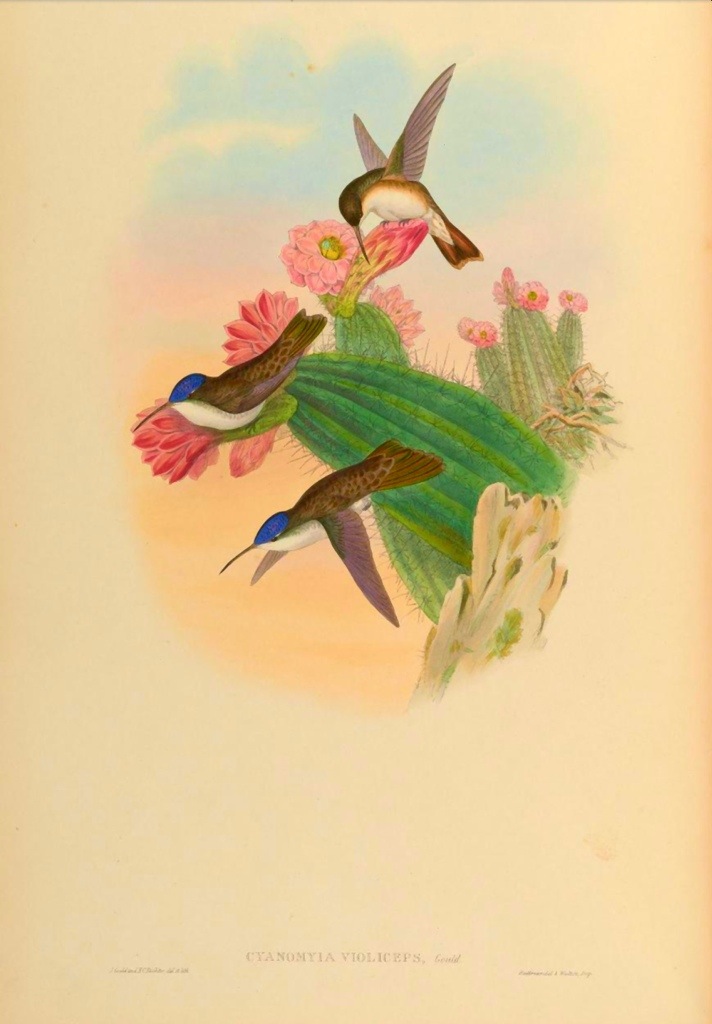 The male has the crown of the head deep
violet-blue; all the upper surface and wing-coverts brown, tinged
with olive-green ; wings purplish brown ; tail deep greenish
bronze; all the under surface white; bill black; under mandible
flesh-colour ; feet blackish brown. The female, or young bird, has
the crown ashy brown; upper surface olive-green, each feather
margined with greyish olive; tail-coverts and tail coppery bronze,
tipped with greyish olive ; under surface white, stained with rusty
red on the flanks.