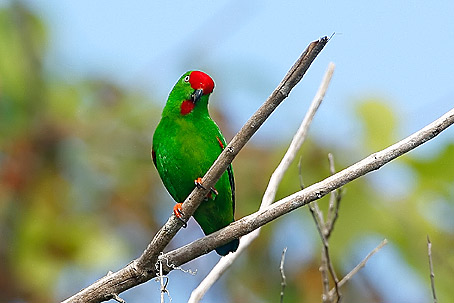 Listen to the sound of Great Hanging Parrot

Great Hanging Parrots nest in tree cavities. There are usually three eggs in a clutch. The female incubates the eggs for 20 days and the chicks leave the nest about 33 days from hatching.

Seen singly or in pairs, either flying overhead or feeding in blossoming trees. Diet consists of flowers and nectar.

Might be nomadic or migratory, in october more numerous in South Sulawesi