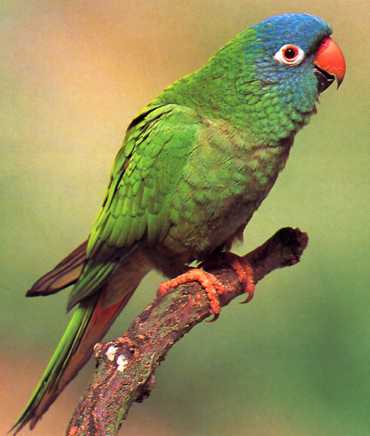 Listen to the sound of Blue-crowned Parakeet

South America : North, East, Southeast. The Blue-crowned Parakeet occurs in lowland dry forests in South America. A remarkable aspect of this species is that it occupies these deciduous forests in several widely separated regions: in northern Colombia and northern Venezuela; in the interior of northeastern Brazil; and from eastern Bolivia and south central Brazil south through Paraguay to north central Argentina.

The Blue-crowned Parakeet’s nest is a hole in a tree. The eggs are white and there are usually three to four in a clutch. The female incubates the eggs for 26 days, and the chicks fledge from the nest about 52 days after hatching

Food items include Sorghum and Bambusa seeds, berries of Condalia lineata and fruit of cacti and crops such as mango; also insects. Feeds in trees and on the ground, in pairs, or small flocks; congregations larger when food abundant. In some areas birds roost in crevices on cliffs. May be seen with Mitred and White-eyed Parrots.

This species has an extremely large range, and hence does not approach the thresholds for Vulnerable under the range size criterion (Extent of Occurrence <20,000 km2 combined with a declining or fluctuating range size, habitat extent/quality, or population size and a small number of locations or severe fragmentation). Despite the fact that the population trend appears to be decreasing, the decline is not believed to be sufficiently rapid to approach the thresholds for Vulnerable under the population trend criterion (>30% decline over ten years or three generations). The population size has not been quantified, but it is not believed to approach the thresholds for Vulnerable under the population size criterion (<10,000 mature individuals with a continuing decline estimated to be >10% in ten years or three generations, or with a specified population structure). For these reasons the species is evaluated as Least Concern.
Large numbers held in captivity (over 94,000 birds expoted from Argentina, were the species is considered a pest, in 1985-90)

This species often travels in flocks, and may fly long distances between roosting sites and feeding areas