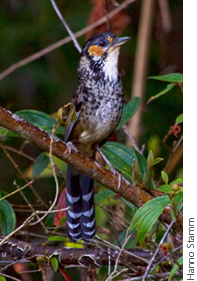 Garrulax konkakinhensis is known only from Mount Kon Ka Kinh, one of the highest peaks in the Central Highlands of Vietnam. It is likely to occur to the north in adjacent Kon Tum province, and could conceivably occur in Laos, because forest habitat within the species’ known altitudinal range extends across the provincial and international borders. Three specimens were collected there in April 1999, including one from a group of at least three individuals. The three specimens were collected between 1,600 and 1,700 m, in the undergrowth of primary upper montane evergreen forest, dominated by tree species from the families Fagaceae, Lauraceae, Magnoliaceae, Hamamelidaceae, Theaceae, Ericaceae, Myrtaceae and Araliaceae. On Mount Kon Ka Kinh, from c.1,600 m to the summit (at 1,748 m), the forest canopy height was c.10-15 m, with 20 m trees in flatter areas of the summit plateau. The species may occur at elevations below 1,600 m, but determination of this was difficult because the species was not heard making any vocalisations during March and April. The forests within Kon Ka Kinh Nature Reserve comprise a mosaic of primary and seral forest formations, and, on the evidence of shifting cultivation, indicate a long history of human utilisation. The forest around the type locality was being logged for large, emergent Fokienia hodginsii and in many places the canopy was broken and there were many clearings. Its presence in logged forest indicates some tolerance of disturbed habitat. (Eames, J. C. and Eames, C. (2001) A new species of Laughingthrush (Passeriformes: Garrulacinae) from the Central Highlands of Vietnam. Bull. B.O.C. 121 (1): 10-23).
← Previous Post
Next Post →