Source to all birds on the Planet
admin
conservation, Emberizidae, Passeriformes
1 Comment

This newly described species is listed as Critically Endangered because there are no known populations and the last record is from 1971; consequently if it does remain extant it is assumed that any population must be tiny. The species was collected on the Llano de Ovejas, a small plateau at 2,400-2,800 m. This species has been discovered solely based on three speciemens in musea. It had been collected last in 1971, the two other speciemens are undated. In fact, in conservation terms there is not much to be done, as the species has never been seen again, despite intensive surveys. There is no evidence other than three skins. 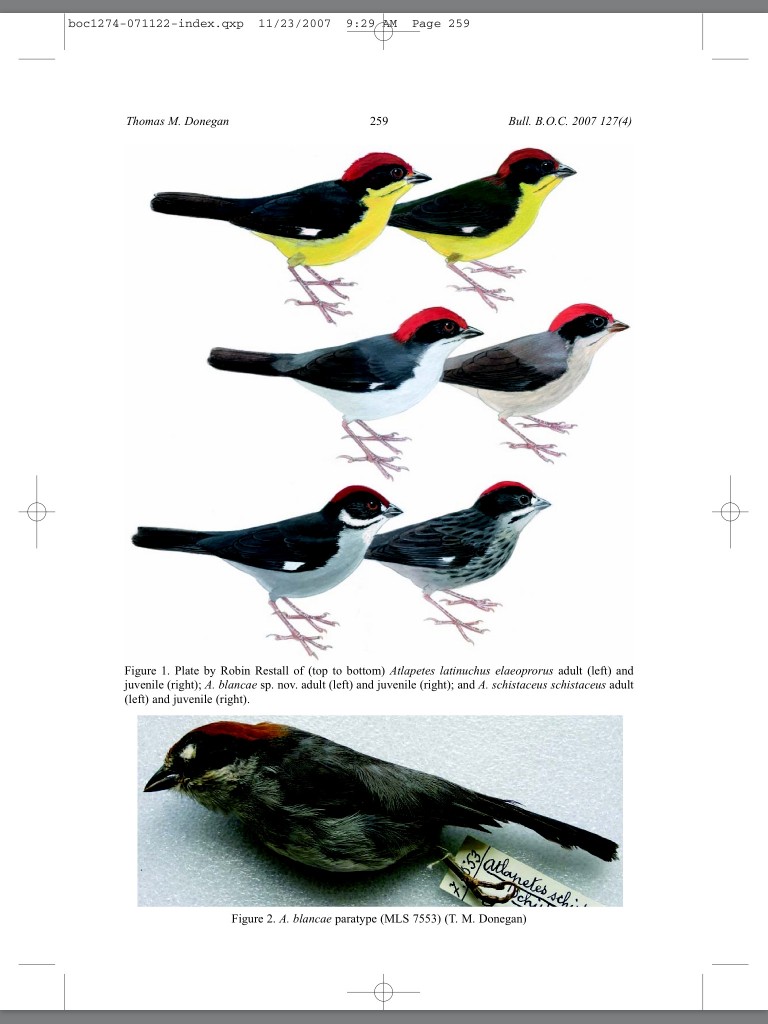 Antioquia Brush-finch Atlapetes blancae is an overall grey brush-finch. Slate grey on the back and uppertail coverts. Dark sooty-grey flight feathers with a black face mask from just in front of the eye to the back of the ear coverts. It has a bright rufous forehead, crown and nape. It is pale greyish white below. It has a dark, fine, indistinct moustachial stripe and a conspicuous small white wing patch. It is slightly paler on the back than congeners in the same area (between Bogota and Medellin).
Donegan, who discovered and described the species, shows the above drawing in his article. The middel pair being the new species, different from the one above (Rufous-naped Brush-Finch) or below (Slaty-grey Brush-Finch). In the field this may be a lot harder, but the grey tone, the small moustache and smaller wing patch are obvious.

It differs from A. latinuchus in its brighter rufous crown, smaller wing panel, greyer (rather than blacker) back and grey rather than yellow plumage below. Differs from A. schistaceus in its larger and less pointed bill, brighter more extensive rufous crown, smaller wing panel, paler underside and lack of a bold moustachial or strong demarcation between the throat and breast. There is no doubt in its region it is a unique species. There is however a third species, the White-winged Brush-Finch, Atlapetes leucopterus. This species is a spitting image of A. blancae, below are the drawings of del Hoyo’s HBW Alive. The big difference is geological, the species is found near Quito, Ecuador, about 450 miles, 700 km, from the location A. blancae was last seen in 1971 (near Bogota). 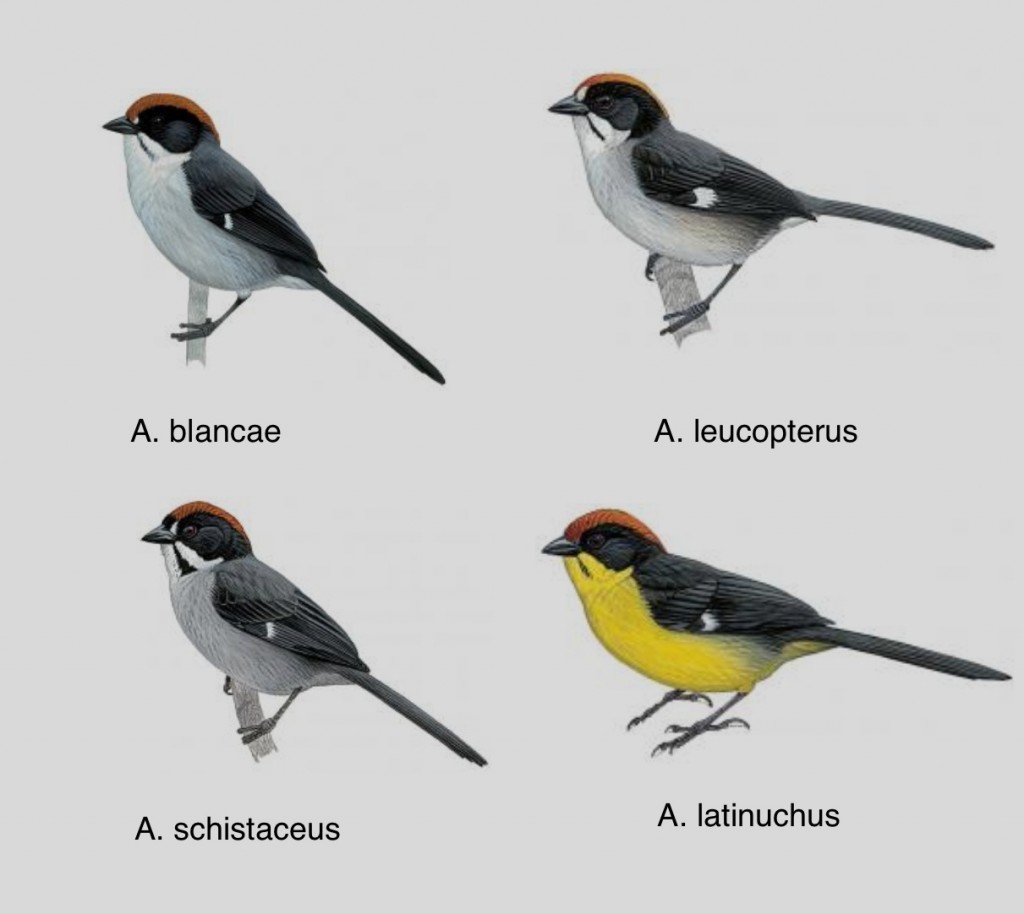 Donegan writes the following:
“Very conservatively and following flawed past taxonomic treatments for the genus (e.g. Paynter 1978), A. blancae could be considered a subspecies of A. leucopterus, which it resembles superficially in plumage and which has an allopatric but distant distribution. However, biometric differences between the northernmost, nominate subspecies of A. leucopterus and A. blancae are substantial, whilst the ranges of the two are separated by over 600 km, suggesting long-term isolation. A. blancae and A. leucopterus are probably not closely related. A. blancae differs from nominate A. leucopterus in the size of the speculum and melanism of the flanks (two characters, plus apparently diagnosable tail- and wing-lengths). Other differences between A. blancae and these sympatric or parapatric species, e.g. crown and mantle colour, and biometrics, were not coded by Donegan & Huertas (2006) due to assumed non-discrete variation in the taxa studied therein.”

Donegan refers to flawed taxonomy, but the major online sources, Birdlife, Avibase, HBW all recognize three subspecies, the discussion is if A. leucopterus paynteri should be upgraded to species level. The drawings show that the species more than just superficially resemble eachother, which is not taken in account.
The SACC committee was not unanimous but most of the YES voters gave Donegan the benefit of the doubt. His research was thorough and his reasoning convincing. In SACC proposal 32/2008 A. leucopterus is not even mentioned at all as a hypothesis. The focus is A. blancae not being a subspecies of A. schistaceus or a hybrid.

Obviously Donegan does not consider A. leucopterus to be closely related and therefore no option to explore. We, here at Planetofbirds, propose a different theory. We think it is possible they are the same species. We became aware of this theory while writing the story of the Long-billed Taylorbird (Artisornis moreaui moreaui and Artisornis moreaui sousae) , a small African Warbler. This species is divided in two disjunct populations about 600 miles, 1000 km apart. It is a forest bird, which is not found in the (patchy) intermediate forest, which consists of suitable habitat. Some researchers suggest the peer pressure was too demanding in the intermediate forest, too many species being territorial at the same forest level. This factor drove the species to the disjunct areas, from which this two subspecies evolved. As it turned out we were also, at least partially, wrong. 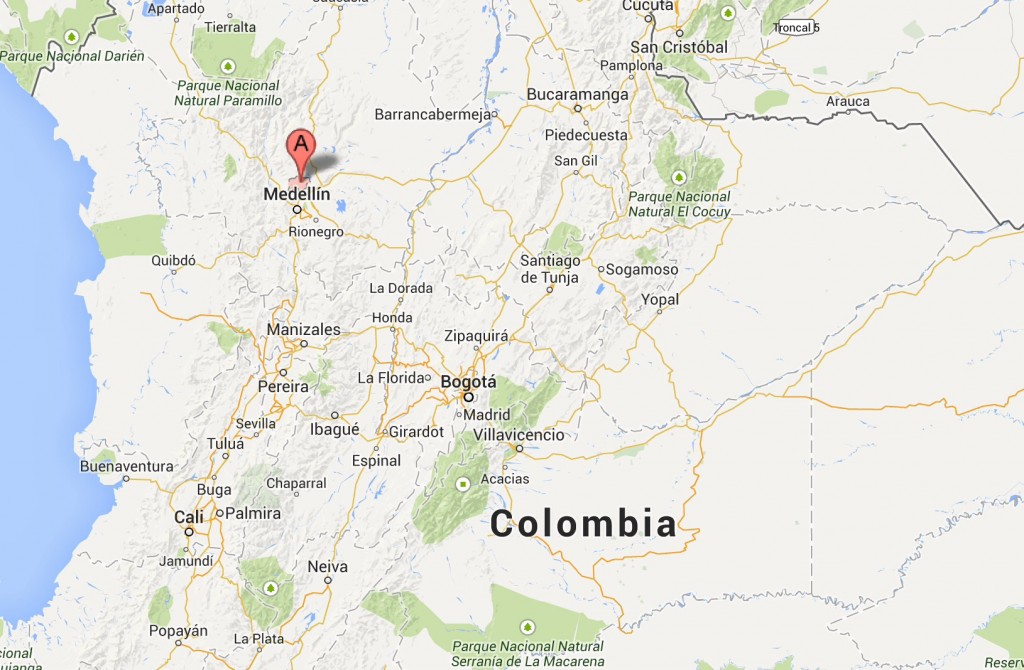 A literary search on Atlapetes and interspecies competition refered to Remsen (1995), a renowned ornithologist (voting member of the SACC committee) who researched the very same question concerning disjunct populations in casu Atlapetes rufinucha, a more southern species. He concluded that the complex mosaic of distributed subpopulations can hardly or not be explained by interspecies competition alone. He argues the atlapetes species (i.c. rufinucha, schistaceus and tricolor) are all from the same lineage, thus eliminating the unlikely need for complex, long-distance movements undertaken by basically sedentary species. Next to this, he points out that different color patterns may occur often in very close related species, especially in the grey-yellow opposition.
In other words, the Atlapetes group are (mostly) all genetically related (polyphyletic is the word) and the beauty is their habitats also link together, in type as well as latitude and elevation. Because of the intraspecies hanky panky it is easier to explain the disjunction of the populations, in different places the same combination of species attributes became extant. Because the same lineage for multiple species exist, the way in which they differ is limited. It is therefore dangerous to conclude that different coloration means different species. The lookalike disjunct population are probably less related than the less lookalike neighbouring species.

A. blancae fits in the same lineage, a very complex set of species, exemplary for taxonomic entanglement. Already in 1853, in taxonomic easier days, Sclater described A. leucopterus:

“It was obtained by him during a recent expedition into the eastern Cordillera of the Andes near Quito at an elevation of 6000 feet above the sea-level. In form and size it is similar to B. pallidinuchus, but the style of coloration is different and more nearly resembles that of B. schistaceus. Sir William Jardine has named it leucopterus, from the conspicuous white spot on the wing. The area of the genus Buarremon appears to extend along the Andean range from Bolivia into Southern Mexico, the vicinity of Bogota being perhaps the principal sedes or focus, where no less than seven or eight species occur.” 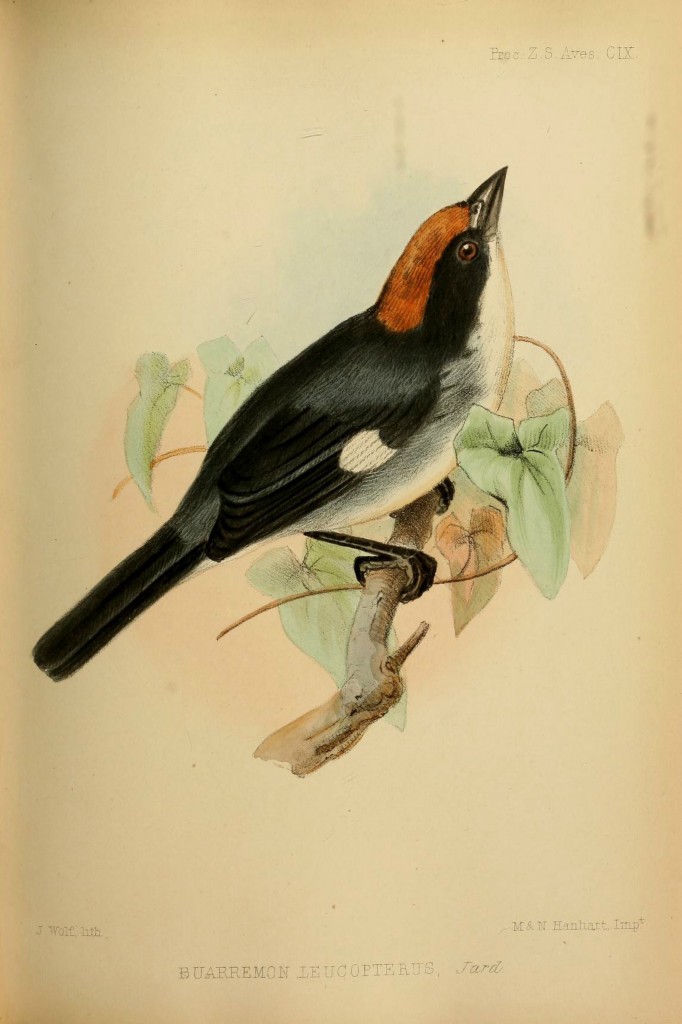 This underlines the Remsen theory, the genus (now Atlapetes, although Buarremon has recently been re-established) has an uninterupted distribution, along the Andes down to Mexico and was also found above 2000 meter elevation. Furthermore the Bogota area has a high number of competative species. Thus bringing the subspecies blancae to extinction, or (hopefully) a very tiny population. In the lineage theory, the nominate is A. schistaceus, which is common in the Bogota area.

Donegan writes in the SACC proposal:
“Persons looking hard for a reason to reject this proposal (on the basis of not liking descriptions without field data) might want to do so on the basis that A. blancae might be some A. l. elaeoprorus mutant or the result of a hybridization event involving multiple heteroses. Each of these hypotheses are unlikely for the reasons set out in the description, meaning in my view that the new species hypothesis is by far the more likely one.”
He is a tenacious man, in one if his other proposals he even suggested the SACC members are dismissing ideas based on ego or technicalities. His proposal to recognize A. blancae was presented to SACC by Remsen.

Whatever the politics, we fully agree with Donegan, in the context of the morphological differences, A. blancae may well be a species. Our rejection is not based on the reasons given in the proposal.
The clad of Atlapetes is extremely diverse meeting the eye, but less so genetically. The number of subspecies is still very much debated. In short and to quote a SACC voting member, it is a mess.

In the opinion of Planetofbirds A. blancae is statistically not feasible. We have shown the extreme complexity in the Atlapetes clad. The differentiation is almost incredible, a sedentary genus with a hugh range, disjunct populations, small differences between species and only three speciemens to show as real evidence, with no extant species currently found. No sound, no prefered habitat, just morphology in a genus this complex. Coloration should not be taken too much in account in speciation as Remsen pointed out, what else is there with just three small corpes to account for? It is found in area where peer pressure is highest in its distribution, and further species differentiation is least likely. The much searched for population still consists of three dead bodies sharing the same characteristics and which differ slightly from other species, abundantly present in the area. One speciemen differed in speculum from the other two, dismissed by Donegan that intraspecies variation in speculum is common, but on other factors (size) weakly supported. What is more likely, a species variation or a whole new species? The evidence is by (lack of) nature purely circumstantial.

In daily life, I teach digital security. A risk exists if any given threat and any vulnerability of the target to that threat is real. There is a risk of a bird species becoming extinct. The threat is unknown but several possibilities exist, habitat loss and interspecies competition are most plausible. The vulnerability is the very small population, moreover there is no extant population.

We are not challeging Donegan’s claim to immortalize his lovely wife, but three speciemens? Two undated and probably found on the same location? In our opinion, any decision protocol should incorporate a preposition stating a species exists, when it is proven extant. We feel conservation resources are too limited to search for a hypothetical species. If it does not exist, there is no risk.