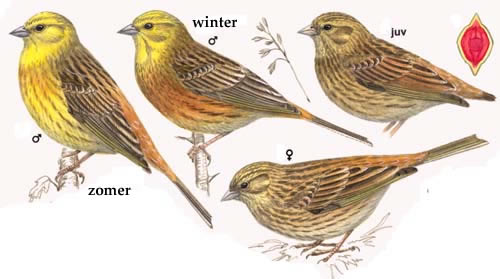 Bright yellow bird with reddish brown upperparts, streaked with darker brown; this distinguishes it from the cirl bunting which has a greenish rump; male has bright yellow head and underparts, the female is more heavily marked with brown streaks.

Emberiza citrinella is a widespread breeder across much of Europe, which constitutes
>50% of its global breeding range. Its European breeding population is extremely
large (>18,000,000 pairs), and was stable between 1970-1990. Although there were
declines in Fennoscandia and western Europe during 1990-2000, most central and
eastern European populations-including sizeable ones in Germany, Czech Republic,
Poland and Ukraine-were stable (the Russian trend was unknown). The species
probably declined only slightly overall

Listen to the sound of Yellowhammer

The yellowhammer Emberiza citrinella is a member of the bunting family and a characteristic res ident species of lowland arable and mixed farmland. It is most obvious in spring and summer when the male has a bright yellow head and breast and perches, singing, on the tops of tall bushes, trees and telegraph wires. The nest is close to ground level in dense grass, field margins, ditch vegetation, at the base of thick low hedgerows or in thick scrub.

Yellowhammers feed on grain, weed seed and the seeds of large grasses in winter,foraging in cereals, cereal stubbles and crop margins. In spring and summer adults and chicks feed mainly on invertebrates.

The yellowhammer builds its nest on or close to the ground in dense vegetation, often at the base of a thick hedge, bank or gorse bush. The nest is made of grasses, leaves, moss and straw and lined with fine grasses. Breeding starts in early April when the first clutch of three to four eggs is laid, and a pair can lay up to three broods each season. The eggs are covered with fine black scribbles. The young are fed on insect food such as caterpillars.

This species has a large range, with an estimated global extent of occurrence of 10,000,000 km2. It has a large global population, including an estimated 35,000,000-62,000,000 individuals in Europe (BirdLife International in prep.). Global population trends have not been quantified, but the species is not believed to approach the thresholds for the population decline criterion of the IUCN Red List (i.e., declining more than 30% in ten years or three generations). For these reasons, the species is evaluated as Least Concern. (source Birdlife.org)