Source to all birds on the Planet
Paridae, Passeriformes
Comments 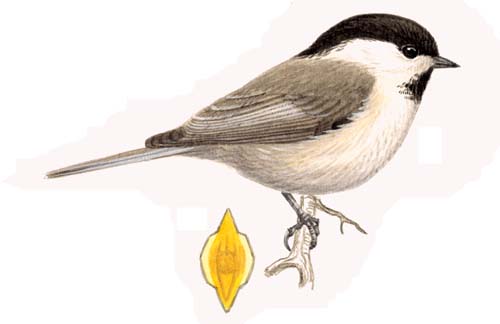 Parus montanus is a widespread resident across most of central and northern Europe,
which accounts for less than half of its global range. Its European breeding population
is extremely large (>24,000,000 pairs), and was stable between 1970-1990. Although
there were declines in Fennoscandia and certain western populations during 1990-
2000, the species was stable in its Russian stronghold and elsewhere across eastern
Europe, and hence underwent only a small decline overall.

Listen to the sound of Willow Tit

In comparison with Marsh Tit, favours cooler and usually more elevated areas, up to treeline in mountains and on borders of tundra. 3 distinct patterns distinguishable. (1) In south of range, montane population inhabits mainly conifer forest provided it contains enough decaying tree-stumps for excavation of breeding holes and has access to clearings, rock-bands, scree, slopes under springs, or boggy patches with willows or alder. (2) At lower levels, mainly linked with open bushy damp stands or lines of low trees such as willow, alder, and birch, and lower woody shrubs such as elder, as well as copious growth of stiff plants such as hemp-nettle. In Britain examples of 1st pattern do not occur, all being related to 2nd: river valleys, borders of reservoirs and overgrown flooded gravel-pits, and farmland hedgerows and copses are favoured in preference even to broad-leaved woodland. (3) Northern race, borealis, occupies birch, conifer, and mixed woodland, damp places in birch and alder coppice, and stands of spruce or pine.

Invertebrates and seeds: mainly invertebrates in breeding season, with seeds, from autumn onwards, dominating in winter. An infrequent visitor to bird-tables in winter. Regularly stores food, especially in late summer and autumn; at least in north of range, in winter largely dependent on stored food.

Laying begins about mid-April in south and central parts of European range, late April or early May in southern Fenno-Scandia, and mid-May in extreme north. Continues into early June, or exceptionally (in north) into July, only one brood. The nest is usually built in rotten tree trunk or stump, often as little as 7-8 cm in diameter so that nest-cavity separated from outside world only by bark; birch most favoured where available; alder, willow, elder, poplar, hazel, ash, and conifers also regularly used; also rotten posts. Nest-hole usually excavated entirely (by both sexes), but existing hole sometimes enlarged, e.g. rotted beginning of hole of woodpecker. Nest is generally much slighter and less well formed than nests of other tits, composed mainly of plant fibres, including strips of bast and bark, dry grass, and plant down; lined with animal hair and plant fibres, occasionally a few small feathers; moss fragments sometimes used, not in quantity except rarely when cavity at bottom of hole needs filling, absence of moss and predominance of vegetable fibres making nest distinctively different from that of Marsh Tit.
Clutch: 4-11, mostly 6-9 eggs with a strong correlation between clutch size and size of nest-cavity. Incubations lasts 13-15 days, young fledge after 17-20 days.

This species has a large range, with an estimated global Extent of Occurrence of 10,000,000 kmÂ². It has a large global population, including an estimated 47,000,000-85,000,000 individuals in Europe (BirdLife International in prep.). Global population trends have not been quantified, but the species is not believed to approach the thresholds for the population decline criterion of the IUCN Red List (i.e. declining more than 30% in ten years or three generations). For these reasons, the species is evaluated as Least Concern. (source Birdlife.org)

Sedentary over much of range, but some northern populations irruptive with large-scale movements recorded in some years.
Distribution map breeding season