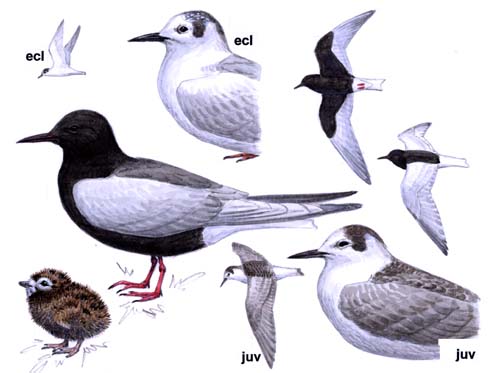 Chlidonias leucopterus is a widespread summer visitor to eastern Europe, which
accounts for less than a quarter of its global breeding range. Its European breeding
population is relatively large (>74,000 pairs), and increased between 1970-1990.
Although there were declines in Romania and Turkey during 1990-2000, populations
were fluctuating or stable across the rest of its European range, and the species was
probably stable overall.

Listen to the sound of White-Winged Tern

Breeds on vegetated inland freshwater lakes, marshes and swamps, from Mediterranean to boreal forest.
In winter occurs in variety of habitats, from inland lakes to rocky coasts, lagoons, rivers and mangrove swamps

Egg laying in April-August, breeds in small colonies up to 100 pairs. Usually monospecific, sometimes with other terns or with Black-necked Grebes of Little Gulls. Nest of water weed with shallow cup, built on mat of floating vegetation in water, occasionally on dry shor or resting on bottom. 2-3 eggs are laid, incubation 18-22 days. Chicks are buffy above, streaked with black, paler below with few dark spots, and pale patch surrounding eye. First breeding at 2 years.

This species has a large range, with an estimated global Extent of Occurrence of 1,000,000-10,000,000 kmÂ². It has a large global population estimated to be 2,500,000-4,500,000 individuals (Wetlands International 2002). Global population trends have not been quantified, but the species is not believed to approach the thresholds for the population decline criterion of the IUCN Red List (i.e. declining more than 30% in ten years or three generations). For these reasons, the species is evaluated as Least Concern. (source Birdlife.org)

Migratory. European and West Asian populations leave breeding grounds from late June to late August, wintering mostly in Africa. Large flocks on East side of Sea of Azov in late August, and passing through East Mediterranean in August-September. Negligible movement off Western coasts, but species numerous in Senegal in September. A few occasionally winter on Black Sea. Common migrants through East Africa, mainly inland, occasionally on coast. In spring, large flocks pass through East Mediterranean, and massive numbers recorded at North Red Sea; at Northern Gulf of Aqaba, c. 20,000 in one afternoon in 1984, and total of 81,000 in 5-day period in 1990. Central and East Asian breeders winter from Burma and China, South through Indonesia and Indochina to Australian and New Zealan. wintering birds in Persian Gulf, Pakistan, Sri Lanka and elsewhere in North Indian Ocean may come from these populations.
Distribution map breeding season