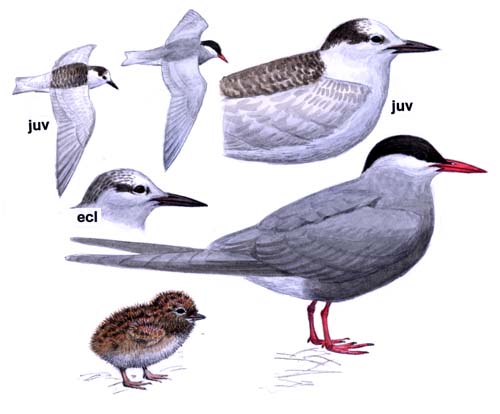 Chlidonias hybrida is a widespread but patchily distributed summer visitor to southern
and eastern Europe, which accounts for less than half of its global breeding range.
Its European breeding population is relatively small (<87,000 pairs), and underwent a moderate decline between 1970-1990. Although the species was broadly stable overall during 1990-2000â€”with stable, fluctuating or increasing trends across most of its European rangeâ€”its population has not yet recovered to the level that preceded its decline. Consequently, it is evaluated as Depleted.
This species has a very fragmented distribution in southern Eurasia, south-eastern Africa and Australia. European birds winter in the Mediterranean regions and in sub-Saharan Africa. The total population of the European Union is estimated at 7000-11000 breeding pairs, 70-75% of which are breeding in Spain (Tucker & Heath). This species has widely fluctuated and its global trends are not well known, but the Spanish population is definitely decreasing. The main reasons for this are wetland reclamation and canalisation of rivers.

Listen to the sound of Whiskered Tern

Diet mainly aquatic and terrestrial insects, also small crabs, fish and frogs.
Flies back and forth or flutters up to 5 m above water, then swoops or drops to pick up small surface items. Often hawks insects over fields and lake margins. Generally forages within 1-2 km of colony.

Breeds May-June in Europe, December in Africa and November-December in Australia. Usually in monospecific colonies up to 100 pairs. Broad but flimsy nest placed on floating or emergent vegetation over water. In very shallow water, nest may rest on bottom, alternatively nest of dry grass on water-lily leaves. 2-3 eggs are laid, incubation 18-20 days. Chicks are black-spotted buff, with black forehead, creamy breast, black bill and pink legs. First breeding at 2 years.

This species has a large range, with an estimated global Extent of Occurrence of 1,000,000-10,000,000 kmÂ². It has a large global population estimated to be 240,000-1,300,000 individuals (Wetlands International 2002). Global population trends have not been quantified, but the species is not believed to approach the thresholds for the population decline criterion of the IUCN Red List (i.e. declining more than 30% in ten years or three generations). For these reasons, the species is evaluated as Least Concern. (source Birdlife.org)