Source to all birds on the Planet
admin
Eurasia, Strigidae, Strigiformes
Comments 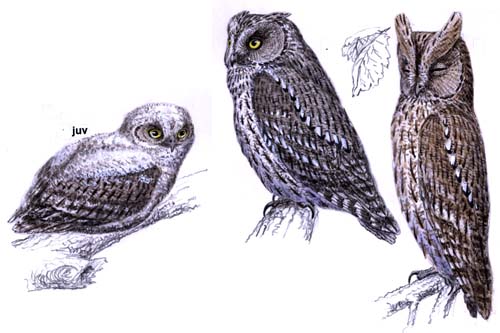 Members of the genus Otus are the Scops and Screech owls. They are relatively small owls, with short, rounded wings. Most have erectile ear-tufts. Otus is a worldwide genus, containing some 45 species.

Listen to the sound of Scops-Owl

Breeds in rather open and semi-open broadleaved woodland, including parks, orchards and plantations, also cultivation with groves, and large gardens, riverine forest, roadside trees, and trees in quiet squares in small towns.
In general, requires good cover of trees, with suitable sites for roosting and nesting, and adjacent open ground with plenty of large insect prey. Avoids closed forest and extensive open areas. Breeds from sea-level to 2000 m.

This species has an extremely large range, and hence does not approach the thresholds for Vulnerable under the range size criterion (Extent of Occurrence <20,000 km2 combined with a declining or fluctuating range size, habitat extent/quality, or population size and a small number of locations or severe fragmentation). Despite the fact that the population trend appears to be decreasing, the decline is not believed to be sufficiently rapid to approach the thresholds for Vulnerable under the population trend criterion (>30% decline over ten years or three generations). The population size is extremely large, and hence does not approach the thresholds for Vulnerable under the population size criterion (<10,000 mature individuals with a continuing decline estimated to be >10% in ten years or three generations, or with a specified population structure). For these reasons the species is evaluated as Least Concern.
Otus scops is a widespread breeder across much of southern and eastern Europe,
which constitutes >50% of its global breeding range. Its European breeding population
is large (>210,000 pairs), but underwent a moderate decline between 1970-1990. The
species was stable or increased in some countries during 1990-2000, but it declined in
many others. Although trends were not available for the key populations in Russia
and Spain, the species’s population has clearly not yet recovered to the level that
preceded its decline. Consequently, it is provisionally evaluated as Depleted.

Northern populations migratory, southern ones partially so or resident. Of 6 west Palearctic races, only one (cyprius, endemic to Cyprus) wholly resident. 2 others are partial migrants. O. s. mallorcae of Iberia present there all year in south, though winter numbers considerably reduced; emigrants presumably cross to Africa. Aegean and Near Eastern race cycladum largely migratory (some winter in southern Greece), but winter range of emigrants unknown. Remaining 3 races are long-distance migrants, most of which reach Afrotropical region in winter. Migrates on broad front, birds regularly overflying Sahara and (especially in autumn) apparently Mediterranean also, in unbroken flight. 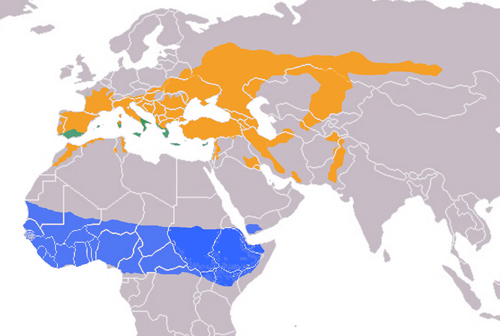