Source to all birds on the Planet
admin
Bucconidae, Piciformes, South America
Comments 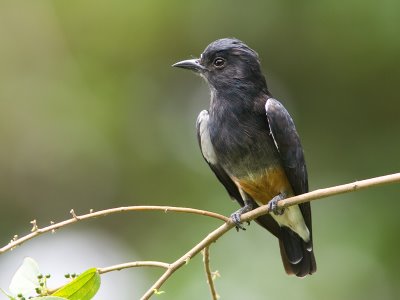 It is mainly glossy blue-back with white on the rump and lower back which is often difficult to see. The belly is cinnamon and the undertail coverts white. It looks plump and has a short tail and broad wings. Sexes are alike, but female slightly larger. Slightly decurved bill and legs black.

Listen to the sound of Swallow-winged Puffbird

Breeds mostly in sandy ground excavated tunnels slightly sloped downwardly about 1-1.5 meter. The chamber is lined with dry grass on which 1-2 eggs are laid. Newly hatched young are naked and black. In Suriname the breeding season coincides more or less with the dry seasons; most nestings occur from July to December, but a few occur in March. No further data.

The Swallow-wing is a quiet bird which sits for long periods in the top
of a tree without moving. It feeds in flycatcher fashion in the air and returns to the same perch. Diet consists of slow-moving flying insects including winged ants. Swallows prey in flight.