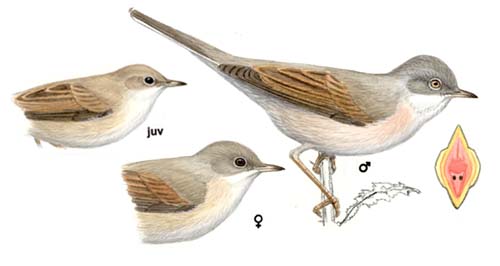 Medium-sized, quite slim but rather large-headed and long-tailed, perky warbler. Epitome of west Palearctic Sylvia, nearly all of which have distinctive males but rather similar female immature plumages.
Crown and cheeks of male grey, of female and immatue brown. Sexes dissimilar, little seasonal variation.

Listen to the sound of Whitethroat

Breeds over continental and oceanic W Palearctic in upper middle to lower middle latitudes, from boreal through temperate to steppe and Mediterranean zones. Mainly in lowlands, but in Switzerland and Caucasus between 1300 to 3200 m, or even higher. Avoids tall closed forest and densely vegetated wetland, requiring ample but discontinuous well-mixed and open cover of tall herbage, low bushes, and shrubs, usually on more or less dry, level or gently sloping, and fairly sunny terrain, sometimes by water or in marshy or fen areas, or in open woodland glades and edges, more often in woods of broad-leaved than of coniferous trees. Often occurs amid cultivation and sometimes in subalpine scrub or on moors or cliff slopes.

Breeds May-June in North-West Europe, May-July in Finland, late April to mid May in West Germany, mid April to July in North Africa. Nest site built in bush or shrub or tall grass or herbs. Nest is a cup-shaped, usually quite deep, sometimes hemispherical, occasionally distorted probably by nestling to give elliptical rim, constructed of grass and herb stems and leaves with some roots, plant down, and cobwebs, lined with finer grasses and rootlets and long hair. 4-5 eggs are laid, incubation, 9-14 days, by both sexes, but only by female at night.

During breeding season mainly insects, especially beetles, larvae, and bugs. In late summer, proportion of fruit taken increases, and on autumn migration and in winter quarters feeds predominantly on berries.
Food obtained in bushes and herb layer by searching foliage and small branches. 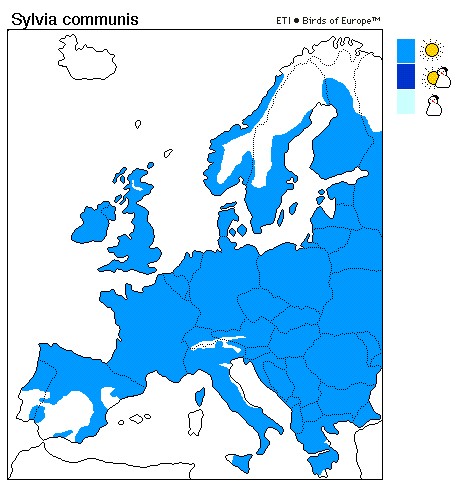