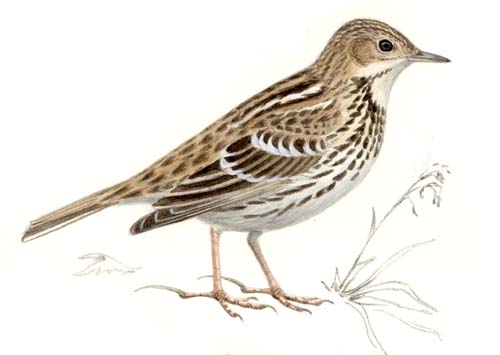 Breeds from fringe of west Palearctic eastward along a mainly subarctic band, apparently sandwiched between Olive-backed Pipit to south and Red-throated Pipit to north. Inhabits bushy tundra and remote taiga swamps, but not pure tundra, apparently preferring overgrown areas with tall dense sedge, reed-grass, and plentiful shrubs or even trees, mainly in lowlands, along rivers and coasts.

Breeding in Siberia: eggs laid late June and July. Probably one brood. The nest is built on the ground in low cover or in shelter of tuft of vegetation or low scrub. Nest is a substantial cup of grass and other leaves, lined with finer vegetation. The eggs are sub-elliptical to oval, smooth and glossy; pale grey, sometimes pink-tinted or even dark red-brown, with grey speckling overall, and occasional black hair-streaks or blotches at broad end. Clutch: 4-5(-6) incubated for about 12-13 days. Young fledge after 12-14 days.

Anthus gustavi has a predominantly Siberian breeding distribution, which extends
just west of the Urals into northern European Russia. Its European breeding
population is small (as few as 1,000 pairs), but was stable between 1970-1990. Trend
data were not available during 1990-2000, but there was no evidence to suggest that
the species declined. Although the size of the European population could make it
susceptible to the risks affecting small populations, it is marginal to a much larger
non-European population. Consequently, it is provisionally evaluated as Secure.

Migratory, wintering in East Indies. Because of thinly spread population, dates of movement remain obscure. In Britain (where 28 recorded up to 1985, almost all on Fair Isle, Scotland), occurs late August to mid-November (mostly late September and early October) and once (in Suffolk) in late April.