Source to all birds on the Planet
admin
extinct, Meliphagidae, Passeriformes
1 Comment 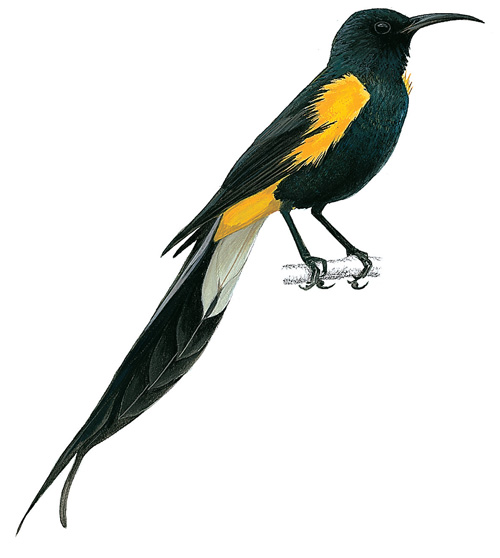 The ancient kings and princes of Hawaii chose this unfortunate creature to be their “royal” bird. As is so often the case when monarchs choose, being the “chosen” one does not necessarily confer safety – and it definitely did not in this case. The honour merely meant that ‘O’os were expected to provide plumes for the famous robes, capes and helmets that are today so prized by ethnologists, but which were once an integral part of the whole culture of pre-European Hawaii. The downfall of the ‘O’o lay in the beautiful tufts of yellow feathers that grew below the wings and on the lower abdomen. These were ripped from the living bird and then woven into a bed of coarse netting; gradually, after the unwilling input of many hundreds of individuals, the cloak began to take shape.

After the feathers were stolen from the bird, those who had trapped it were supposed to let it go. Whether or not they did is something of an open question. ‘O’os fried in their own fat were, apparently, a great delicacy and it is hard to imagine hungry Hawaiians passing up the chance of a tasty morsel, particularly as any chance of being caught defying the law would presumably be remote. Even if the plumes were carefully removed and the bird released there is no guarantee that it would be capable of surviving, for the shock alone might be sufficient to cause death, but perhaps it could.

The species was first scientifically discovered by naturalists who sailed with Cook on his third voyage around the world. Cook himself did not survive this expedition and was killed at Kealakakua Bay, Hawaii, during February 1779. The voyage itself was completed, however, and when the ships eventually arrived in England specimens of Moho nobilis were among the treasures brought back. John Latham in his General Synopsis of Birds (1781-1785) described the “Yellow-tufted Bee-eater” from these specimens.

Although the species must once have been common on Hawaii, by the time of the coming of Europeans it was in decline and no European observer described it as anything but shy and wary. No wonder! It was seen to take nectar from flowers but it also tucked into bananas, as well as insects and their larvae. In flight it showed a dipping action and the wings moved so rapidly that they made a continuous buzzing sound.

These birds frequented the topmost branches of the trees and, perhaps as a result of this preference, the nest and eggs were never found, although an experienced ornithologist, R. C. L. Perkins, did see young individuals that were recently out of the nest. The call was harsh and clear, and from it the name ‘O’o is derived. Since there is often confusion, it might be added that the pronunciation of this name should be in the form of two o’s separated by a glottal stop, “oh-oh”, rather than “oooww”. The records indicate that the species was once widespread over the whole island of Hawaii, as it was evidently able to live at quite high altitudes.

Hunting for plumes obviously depleted numbers, but other factors probably also played a part in bringing about its extinction. Perhaps some kind of avian disease carried to Hawaii by an introduced species was partly responsible or maybe it was just the general breakdown of the ecosystem that was responsible for the species’ disappearance. The last genuine report of the Hawaii ‘O’o probably concerns an individual heard singing on the slopes of the volcano Mauna Loa around the year 1934.