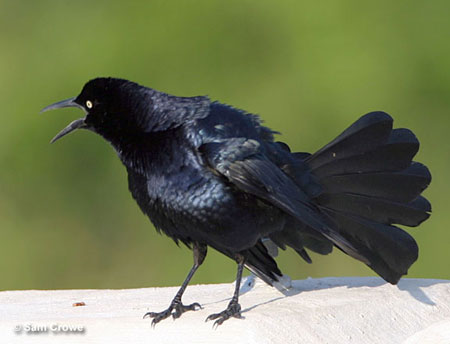 Male, a very large, purple-glossed blackbird, much larger than the Common Grackle and with a longer, more ample tail. Female is much smaller than the male; brown, with a pale breast. Adults have yellow eyes.

Listen to the sound of Great-tailed Grackle

Groves, thickets, farms, towns, city parks.
Found in many kinds of open and semi-open country, mostly in the lowlands, including farmland, marshes, irrigated fields, suburban lawns, brushy areas. Avoids true desert situations but may be common around streams or ponds in dry country.

Nests in colonies. In courtship and territorial display, male perches in the open, fluffs out feathers, rapidly flutters wings while making harsh calls. Also postures with bill pointed straight up. Both males and females may have more than one mate.

Nest: Site varies; usually in dense vegetation near water, including dense shrubs or low trees, but also in marsh or in tall trees. Often 2-
20′ above ground or water, but can be as high as 50′. Nest (built by female) is a bulky open cup made of twigs, grass, weeds, cattails, rushes,
lined with fine grass. Mud or manure often added to base of nest. Females may steal nest material from each other.
Eggs: 3-4, sometimes 5. Pale greenish blue, marked with brown, gray, and black. Incubation is by female, 13-14 days.
Young: Fed by female only. Young leave the nest about 3 weeks after hatching.