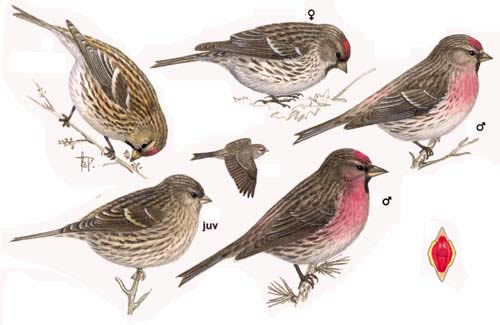 A Common Redpoll is a streaky finch with pale feathered edges. The forehead and crown are red, whereas the lores and chin are black. The eye line is dark; the supercilium is pale. The cheeks are a darker gray than the rest of the head and nape. The median and greater coverts are solid gray with broad pale tips that create two wing bars. The flight and tail feathers are gray with buff-colored edges. The rump is pale and streaked with gray. The breast, flanks, and belly are whitish in color. The breast and flanks are streaked, but the amount of streaking varies. Males have a variable amount of rose wash across the upper breast that is not apparent in females. The yellow bill is sharply pointed, with a black tip and culmen. The female is similar to male, but darker and streakier. Little or no red, except on crown.

Listen to the sound of Redpoll

Between the months of April and August. the female constructs the nest on branches of spruce or in the crevice of a Willow anywhere from 1-2 meters above the ground. It is an open cup of fine twigs, rootlets and grasses. Lined with thick layer of feathers or hair . Placed in small tree or shrub. The eggs are greenish white to pale blue, spotted with purple at large end. The ctch Size is usually 4-6 eggs. Incubation lasts 10-11 days, the chicks fledge after 12 days, broods: 1, occasionally 2. 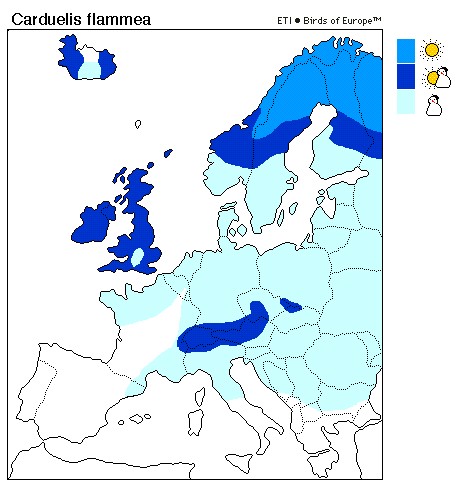