Source to all birds on the Planet
admin
Gruiformes, Heliornithidae, Latin America
Comments 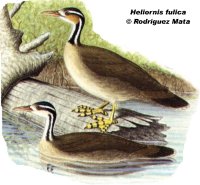 The Sungrebe is a small slim-bodied water bird, typically 28-31 cm long and weighing 130 g. It is mainly brown, with a long neck and blackish tail, and a long red bill. The crown and neck are strikingly patterned with black and white stripe, and the feet are black and yellow. The sexes differ in the colour of the cheeks, buff in the female and white for the male.

Listen to the sound of Sungrebe

Found in Central and South America, South to peru, Bolivia and Northern Argentina. In Suriname not uncommon in streams, rivers and ponds or even wet overgrown coffee plantations.

The twig nest is built low in a bush over water; three or four brown-mottled cinnamon eggs are laid, and incubated for about eleven days. The hiarless are carried around by the adults in special skin pockets beneath the wings.

Diet consists of invertebrates, insects and seeds taken from water and vegetation.