Source to all birds on the Planet
admin
Eurasia, Gaviidae, Gaviiformes
Comments 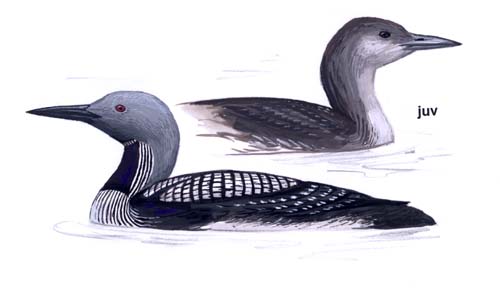 Medium-sized diver between Red-throated G. stellata and Great Northern G. immer in build. Adult breeding: upperparts blackish with rectangular white spots on back, most prominent on scapulars, and white below with black and white streaks on sides of upper breast. Head and neck grey, palest on hindneck, with black and white vertical stripes on sides of neck bordering black throat patch. Adult non-breeding: Dark grey-brown on head and upperparts clearly demarcated from white throat and underparts. Crown and nape are paler than back (unlike Great Northern) and flanks often show a white patch visible on a swimming bird. Intermediate build and bill held straight are best identifying features but very difficult to separate from Pacific Diver and may not be possible with non-breeding birds.

Listen to the sound of Arctic Loon

Breeds beside medium-large freshwater lakes, often with islands. On passage and in winter moves to coastal areas and occurs on estuaries, bays and sheltered seas.

Breeds early-May to September, begins mid-June in north of range. Nests beside water often on an island or spit, a shallow scrape or more rarely a substantial mound of vegetation built in shallow water. Clutch 2 (1 in replacement clutch), olive-brown, sometimes more greenish with sparse black blotches (84 x 53mm). Incubated by both sexes for 28-29 days. Young tended by both sexes, feed themselves at 35 days and fly at about 60 days

Migratory and dispersive. Some Scottish breeding lochs deserted August, but movement to salt water chiefly September-October; return about April. In Lapland and Russia, timing of movements to and from breeding lakes associated with thawing and freezing of fresh waters; spring return faster. Some reach Baltic by September and most at sea by mid-October. Main departures from Baltic and Black Sea winter quarters from mid-April to mid-May