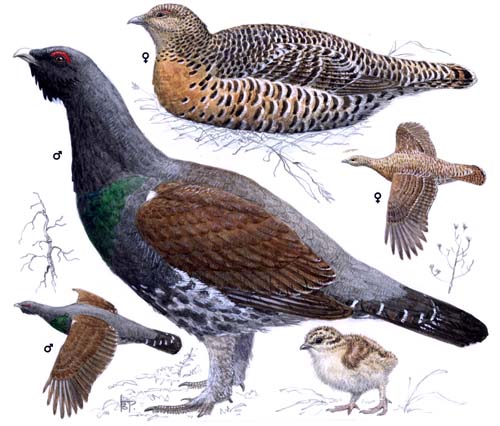 Huge grouse, with noticeably broad wings and tail and heavy bill. Male looks all slate at distance but shows dark brown back, white marks at shoulder and on rear flanks and green gloss on breast at close range. Female resembles female of Black Grouse but differs in unbarred chestnut band over breast, lack of wing-bar and much more heavily barred tail.
male unmistakable; huge size and bulk immediately recall Turkey.female not easily confused with any otherfemale grouse except Black Grouse. May hybridize with Black Grouse and Pheasant. Flight action noticeably more powerful than other grouse; in spite of bulk, shows great agility in woodland, flying easily between trees or out of canopy. Immediate escape from cover noisy (with individual flaps of wings discernible) but wing-beats silent in full flight. Surprisingly nimble when climbing branches.
The capercaillie shows lekking behaviour, that is, mating occurs on arenas situated at exposed sites in open forest stands or mires, i.e. leks, on which males and females aggregate in late winter. Males generally converge earlier than do females on the leks, where they occupy and defend small territories during the breeding season, i.e. from late winter to mid spring. This territorial behaviour is age-related, and males 4 years old and older defend the smallest territories positioned around the lek, whereas 1-2 years old males generally occupy marginal territories.

Three subspecies inhabit geographically isolated mountain ranges in western and central Europe: T. u. cantabricus occurs in the Cantabrian Mountains, T. u. aquitanicus in the Pyrenees and T. u. rudolfi in the Carpathians Mountains.
Most arboreal of genus, in boreal and temperate forest zones, predominantly coniferous and continental, but also in oceanic climates and in mixed stands. Locally in broad-leaved woodland, with holly supplying evergreen element, e.g. in Cantabrian Mountains, Spain. Occupies several ecologically distinct coniferous types, from tall, dense, dark forests of spruce and fir through lighter often more open taiga and forests of pine and larch, to mixed forests, e.g. with understorey of birch or aspen, and in Russia to mountain woodlands of stunted oaks or steppe woodlands of old mature oak. Strongly prefers areas where extensive well-grown tree stands alternate with glades or other more open terrain carrying berried plants such as bilberry. Felling and excessive human disturbance now render most lowland forests untenable except in remote regions; in south and west of range most occur in upland or mountain valley and escarpment forests, from c. 600 m upwards in Jura (France), mostly 1200-1500 m in Alps, up to c. 450 m in Scotland, 1200-1600 m in Cantabria, and 1700-2000 m in Pyrenees. Essential amenities which must occur on or near territories include fern or other cover for hiding, dusting places, water for drinking, and pick-up points for gizzard grit.

This species has an extremely large range, and hence does not approach the thresholds for Vulnerable under the range size criterion (Extent of Occurrence <20,000 km2 combined with a declining or fluctuating range size, habitat extent/quality, or population size and a small number of locations or severe fragmentation). Despite the fact that the population trend appears to be decreasing, the decline is not believed to be sufficiently rapid to approach the thresholds for Vulnerable under the population trend criterion (>30% decline over ten years or three generations). The population size is extremely large, and hence does not approach the thresholds for Vulnerable under the population size criterion (<10,000 mature individuals with a continuing decline estimated to be >10% in ten years or three generations, or with a specified population structure). For these reasons the species is evaluated as Least Concern.
Tetrao urogallus is a widespread resident in northern Europe, but occurs more patchily
farther south, with Europe accounting for less than half of its global range. Its
European breeding population is large (>760,000 pairs), and was stable between
1970-1990. Although the species declined across much of its European range-notably in Finland and Sweden-during 1990-2000, the key Russian population increased
and another sizeable population, in Norway, was stable. Consequently, the species
probably remained stable overall.
This large grouse inhabits old coniferous forests in temperate and boreal regions of Europe and western Asia. European Union (12 Member States) populations are estimated at 10.000 breeding pairs. Everywhere this species is undergoing a strong decrease, mainly because of the felling of old forests and the disturbance by tourism. Climatic changes could also have some adverse effect

Mainly resident; by reason of tree-feeding habits, indifferent to heavy snowfall. Winter feeding ecology leads to local movements in many areas; in Scotland, shifts to pine forest from woods with little or no pine, and in FSU, especially in south, regular seasonal displacements from deciduous to coniferous woodland for winter months. 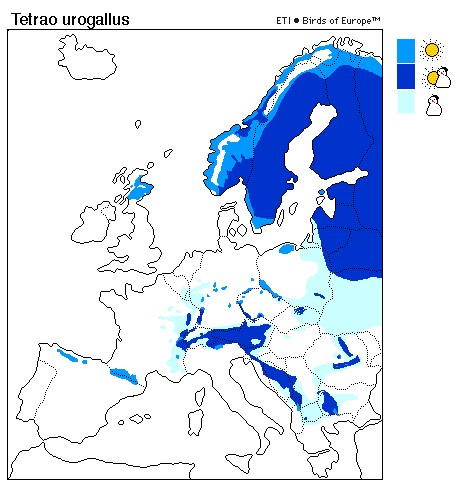