Source to all birds on the Planet
admin
Cuculidae, Cuculiformes, Eurasia
Comments 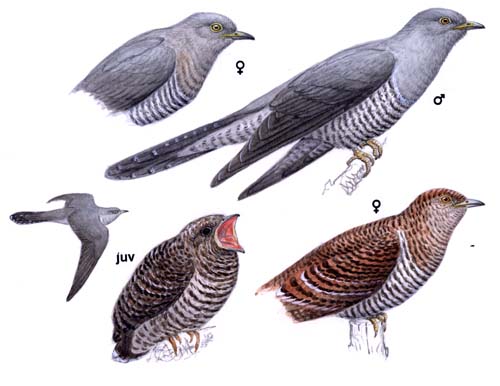 The Common Cuckoo (Cuculus canorus) is a medium-sized bird that averages between 32 to 37 centimeters in length. The males have solid gray coloring over their heads, neck and wings. Their bellies are white with gray to black stripes, dark gray tail feathers and black eyes. Bills are pointed and black of color. The female Cuckoo resembles the males, but with morphed brown coloring.

Listen to the sound of Cuckoo

May-Jun in NW Europe, Apr-May in Algeria, Apr-Jul in India and Myanmar. Brood-parasitic, hosts include many insectivorous songbird species, like: flycatchers, chats, warblers, pipits, wagtails and buntigs.
Often mobbed by real or potential hosts near their nests. Eggs polymorphic in color and pattern, closely match those of host in color and pattern.
Nestling period 17-18 days, evicts host’s eggs and chicks.

Migratory in N of range, arriving in SW Britain mainly Apr – May, when occasionally recorded in small parties, and even in one flock of 50+ birds; also seasonal in hill country from Assam and Chin Hills to Shan States, where present Mar – Aug. Resident in tropical lowland areas of S Asia. Winter resident in sub-Saharan Africa and in Sri Lanka. W Palearctic populations migrate to Africa, where a Dutch-ringed juvenile found in Togo in Oct and a British-ringed juvenile found in Cameroon in Jan; migrants appear in N Senegal as early as late Jul through Oct; in W Africa nearly all records are in autumn ( Sept – Dec), birds apparently continuing on to C & S Africa. Race bangsi occurs on passage in W Africa, and winters S of equator from W Africa to L Tanganyika. Asian populations of nominate canorus and bakeri winter in India, SE Asia and Philippines, also in Africa, but the extent of migration of Asian birds to Africa is unknown; some subtelephonus migrate through Middle East and occur in winter from Uganda and E Zaire to Zimbabwe, Mozambique and Natal. Mainly a passage migrant in Middle East, though some breed in region. Migrants also appear on islands in W Indian Ocean ( Seychelles, Aldabra). Nominate canorus accidental in Iceland, Faeroes, Azores, Madeira, Canary Is and Cape Verde Is, rarely also Alaska and eastern N America; one record of canorus in Indonesia, off W Java in winter. Autumn migration starts in August and continues until October. The main passage through Egypt is in September and the first half of October, with a peak in the third week of September (Goodman & Meininger 1989). Southward movement through Africa lasts from September to December and is linked to the occurrence of rainfall and the growth of cover.