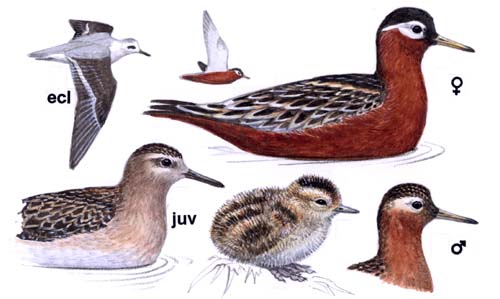 Listen to the sound of Grey Phalarope

Breeds near coast, on marshy tundra with small pools, boggy meadows with moss and grass, marshy river valleys or islets in fjords.
Outside breeding season pelagic, in tropical and subtropical upwelling zones where plankton occurs at high concentrations

Egg laying from June to July. Pairs bond monogamous, but, when excess of males, polyandrous. Female usually leaves male after the clutch is completed. No territorial behavior.
Breeding males have their own feeding flocks and females, failed breeders and non-breeders also feed together in small parties. Nest is built in short vegetation, usually close to or surrounded by water. Nest is a shallow scrape, which male lines with plant material. 4 eggs are laid, incubation lasts 18-20 days, tended by male. Chicks have cinnamon buff upperparts with white patches and black streaks, three black streaks on back, underparts pale violet grey with some buff on flanks and white on breast. after fledging the chicks are tended by male.

Invertebrates, including insects and their larvae: caddisflies, beetles and bugs, also molluscs, crustaceans, annelids, spiders, mites, and occasionally plant material.
Feeds in or around small pools or lagoons, also often at sea. forages by swimming, wading and walking, and typically spins around fast pecking at or just below water surface, also quickly lunges forward at prey.
Outside breeding season feeds at sea on plankton, including amphipods, and small fish, from water surface or just below, using exceptionally broad bill.

This species has a large range, with an estimated global Extent of Occurrence of 100,000-1,000,000 km2. It has a large global population estimated to be 1,000,000-1,900,000 individuals (Wetlands International 2002). Global population trends have not been quantified, but the species is not believed to approach the thresholds for the population decline criterion of the IUCN Red List (i.e. declining more than 30% in ten years or three generations). For these reasons, the species is evaluated as Least Concern.
Phalaropus fulicarius is a summer visitor to the European Arctic, which accounts for
a tiny proportion of its global breeding range. Its European breeding population is
very small (as few as 390 pairs), but was stable between 1970-1990. The key Svalbard
population remained stable during 1990-2000, and the species was probably stable
overall. Although the size of the European population could render it susceptible to
the risks affecting small populations, it is marginal to a much larger non-European
population.