Source to all birds on the Planet
admin
Anatidae, Anseriformes, Eurasia
Comments

The shelducks, genus Tadorna, are a group of large birds in the Tadorninae subfamily of the Anatidae, the biological family that includes the ducks and most duck-like waterfowl such as the geese and swans. The namesake genus of the Tadorninae, Tadorna is very close to the Egyptian Goose and its extinct relatives from the Madagascar region, Alopochen. While the classical shelducks form a group that is obviously monophyletic, the interrelationships of these, the aberrant Common and especially Raja Shelducks, and the Egyptian Goose were found to be poorly resolved. Fossil bones from Dorkovo (Bulgaria) described as Balcanas pliocaenica may actually belong to this genus. They have even been proposed to be referable to the Common Shelduck, but their Early Pliocene age makes this rather unlikely.

The common shelduck is not sexually dimorphic, meaning males and females look alike. The only distinguishing characteristic is that males have a “knob” between their bill and forehead during the summer. These large ducks have white plumage, with dark green coloration on the head and random spots on the back. They also have brown coloration under the tail and in a band across the chest. Outside of the breeding season and as juveniles, these colors will appear somewhat duller. They also have pink legs and a red bill.

Listen to the sound of Shelduck

These birds can be found on temperate coasts and wetlands in Europe, Africa, and Asia. They nest in western Europe through the Middle East and Central Asia into northeast China, while spending their winters south of this region through North Africa.

These ducks are very social and tend to live in large flocks, some containing up to 50 birds. These birds are monogamous, so when a mating pair is formed, they stay together for life. They build nests in caves, deserted burrows, and other similar places. Females will lay their eggs in May and lay as many as twelve eggs in a clutch, which can take up to one month to hatch. Both parents help care for the young, which are able to fly six to eight weeks after hatching. Shortly thereafter, they will leave the nest.

Common shelducks will feed on a variety of small invertebrates, including insects and crustaceans.

British population mainly resident, but with regular, short, seasonal movements, deserting small breeding pools and meres to winter on some large reservoirs. Flocks develop September-December and disperse March-April. Increasing records in continental Europe show that some birds wander further afield. Migratory in North America, withdrawing from breeding range (except in California) to winter in Pacific, Atlantic and Gulf coastal states of USA and south into Mexico, Belize, and Guatemala 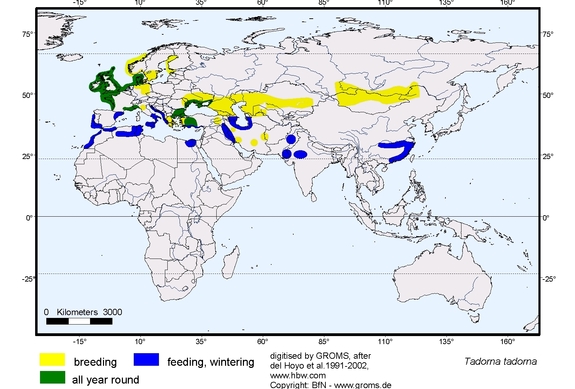