Source to all birds on the Planet
admin
Accipitriformes, Africa, Sagittariidae
Comments 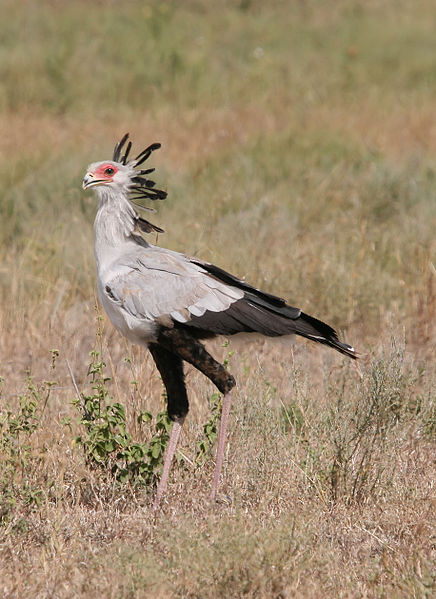 The Secretary bird is so named because of the crest of long feathers at the back of its head that resemble quill pens that 19th century clerks stuck in their wigs. Unlike other birds of prey, it has long legs and tail feathers. The genus Sagittarius refers to the bird?s resemblance to an archer and the species name, serpentarius to the fact that the birds are often seen preying on snakes.

The Secretary Bird is instantly recognizable as having an eagle-like body on crane-like legs which increases the bird?s height to around 1.3 m tall. This 140 cm long bird has an eagle-like head with a hooked bill, but has rounded wings. The wingspan is over 2 m (6.6 ft). Due to its long legs and long tail, it is both longer and taller than any other diurnal raptor.[11] The neck is not especially long, and can only be lowered down to the inter-tarsal joint, so birds reaching down to the ground or drinking must stoop to do so. From a distance or in flight it resembles a crane more than a bird of prey. The tail has two elongated central feathers that extend beyond the feet during flight, as well as long flat plumage creating a posterior crest. Secretary Bird flight feathers and thighs are black, while most of the coverts are grey with some being white. Sexes look similar to one another as the species exhibits very little sexual dimorphism, although the male has longer head plumes and tail feathers. Adults have a featherless red face as opposed to the yellow facial skin of the young.

Listen to the sound of Secretarybird

Africa : widespread. Sagittarius serpentarius occurs in sub-Saharan Africa, from southern Mauritania, Senegal, The Gambia and northern Guinea eastwards, north of the forest zone, through southern Mali, Burkina Faso, Ghana, Togo, Benin, southern areas of Niger, Chad and Sudan and northern parts of Nigeria, Cameroon and the Central African Republic, to Ethiopia and north-western Somalia, and south through eastern areas of the Democratic Republic of Congo, Uganda, Kenya and Tanzania, to southern Africa, including Angola, Zambia, Malawi, Mozambique and South Africa. It is variably described as common to rare and localised, and is sedentary in some parts of its range and nomadic in others. Ad-hoc records, localised surveys and anecdotal observations indicate an apparent decline in many parts of the species’s range, with some of the strongest evidence suggesting rapid declines in Tanzania since the late 1990s and in South Africa between 1987-1991 and 2007-2010.

Its preferred habitat is open grass plains and steppes, and savannah and bushveld when it is not too dense.

Nests are built at a height of 5-7 m (15-20 feet) on Acacia trees. Both the male and female visit the nest site for almost half a year before egg laying takes place. The nest is around 2.5 m (8 feet) wide and 30 cm (1 foot) deep, and is constructed as a relatively flat basin of sticks. Secretary birds lay two to three oval, pale-green eggs over the course of two to three days, although the third egg is most often unfertilised.[citation needed] These eggs are incubated primarily by the female for 45 days until they hatch. The Secretary Birds are facultatively fratricidal.[18] There are conflicting opinions on this phenomenon also called Cainism – “No evidence [exist] of sibling aggression, but youngest in brood of 3 almost always dies of starvation…” [19] Considering that the 2 parents must provide food for 3 chicks at a rate of one feeding per hour after day 17 after incubation, one can understand why the last of the chicks to hatch has the least chance of survival. The downy young can feed autonomously after 40 days, although the parents still feed the young after that time. Both the parents feed the young. At 60 days, the young start to flap their wings, and by day 65-80 are able to fledge. Fledging is accomplished by jumping out of the nest or using a semi-controlled fall via fervent wing flapping to the ground. After this time, the young are quickly taught how to hunt through expeditions with their parents and are considered independent soon after.

The staple diet of the Secretary Bird is a combination of small ground mammals and large insects, some young birds, lizards, snakes and occasionally larger creatures up to the size of a young hare. Its equipment for killing differs from all other birds of prey in that its kills by stamping with its long, powerful legs, engaging the short rear talon with the base of the skull of its prey with extreme force and absolute accuracy. Its method of killing its prey – stamping with the long legs and the short, bluntish but extremely hard rear talon is also unique as are its extremely long legs – the legs which have earned it the nickname of “long-legged marching eagle”. Young are fed liquefied and regurgitated insects directly by the male or female parent and are eventually weaned to small mammals and reptile fragments regurgitated onto the nest itself. The above foodstuffs are originally stored in the crop of the adults. Secretary Birds have two distinct feeding strategies that are both executed on land. They can either catch prey by chasing it and striking with the bill, or stamping on prey until it is rendered stunned or unconscious enough to swallow.

This species has an extremely large range, and hence does not approach the thresholds for Vulnerable under the range size criterion (Extent of Occurrence <20,000 km2 combined with a declining or fluctuating range size, habitat extent/quality, or population size and a small number of locations or severe fragmentation). Despite the fact that the population trend appears to be decreasing, the decline is not believed to be sufficiently rapid to approach the thresholds for Vulnerable under the population trend criterion (>30% decline over ten years or three generations). The population size may be moderately small to large, but it is not believed to approach the thresholds for Vulnerable under the population size criterion (<10,000 mature individuals with a continuing decline estimated to be >10% in ten years or three generations, or with a specified population structure). For these reasons the species is evaluated as Least Concern.
Young are preyed upon by crows and kites as they are vulnerable in Acacia tree tops. As a population, the Secretary Bird is mainly threatened by loss of habitat and deforestation. In 1968 the species became protected under the Africa Convention on the Conservation of Nature and Natural Resources.Nevertheless the species is still widespread across Africa, and has adapted well to arable land where prey animals such as rodents are more common than in traditional habitat. The species is well represented in protected areas as well.

The Secretary Bird has traditionally been admired in Africa for its striking appearance and ability to deal with pests and snakes. Africans sometimes call it the Devil’s Horse. As such it has often not been molested, although this is changing as traditional observances have declined. The Secretary Bird is the national emblem of Sudan as well as a prominent feature on the Coat of arms of South Africa. In Sudan, it is featured in the middle white strip of the Presidential Flag; it is the main object on the Presidential Seal, and features heavily in Sudanese military insignia. The Secretary Bird on the Presidential Flag and Seal has its head turned to the right, with its distinctive crest clearly visible and its wings spread out with a white banner between its outstretched wings reading “Victory is Ours”. In South Africa, the Secretary Bird, while not the official bird, is featured as a symbol on the national coat of arms, representing vigilance and military might, as well as the rise and pride of modern South Africa. The Secretary Bird has been a common motif for African countries on postage stamps, over 65 stamps from about 30 countries are known as of date including some from stamp-issuing entities such as Ajman, Manama. the Maldives and the United Nations where the bird does not occur

Resident. Generally resident, but somewhat nomadic, making local movements in response to fires, drought, and grazing. There are no regular seasonal movements in southern Africa, but wide fluctuations in numbers are known to occur at some localities