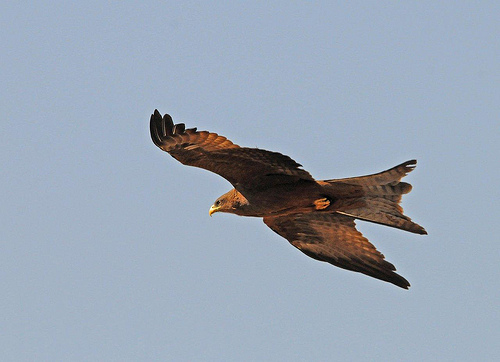 Milvus is a genus of medium-sized birds of prey. It is an Old World group consisting of three kites which form part of the subfamily Milvinae. Its systematics are under revision; it contains 3 or 4 species.

Listen to the sound of Yellow-billed Kite

Ubiquitous, occuring from semi-desert, grassland and savanna to woodland, but avoids dense forest
Commonly aquatic habitats, rivers, lakes, wetlands,seashores and nearby in meadows and along margins of wetlands. Often linked with man to greater or lesser degree.

In temperate zones of Eurasia,Mar-Jun, in tropical Africa, normally in dry season, in S Africa, aug-Dec, in Australia, mainly Jul- Nov.
Solitay or loosely colonial, nests in trees, building nest in fork or on branch or on wide side branch, also on cliff ledges, locally along coast. platform of sticks which often includes rags or plastic, paper, dung or skin.
2-3 eggs, incubation 26-38 days, normally by female almost exclusively, if male brings sufficient food, female may not hunt during entire breeding attempt.

Essentially carrion and small or medium sized mammals and birds, also fish, lizards, amphibians and invertebrates can be important locally or seasonally.
Diet varies according to local availability, with proportionally more prey captured during breeding.
More unusually, vegetable matter, particularly oil palm fruits.
Catches prey on ground or water, large insects caught in air, and then eaten on wing. Often forages around margins of waterbodies, and by refuse dumps, slaughterouses or roads, where looks for animals knocked down by traffic.

Not yet recognized by Birdlife