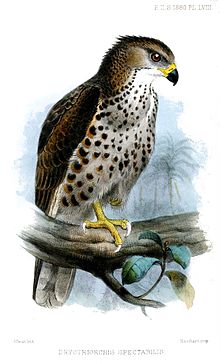 Members of the genus Dryotriorchis are medium-sized hawks. Their wings are short and rounded, their tail long and rounded. They have a large head housing large eyes and a stout beak. The legs are covered with rough scales, terminating in short, sharp talons on digits of medium length. The feathers of the top of the head are slightly pointed, forming a small crest. These snake-hawks are much smaller than the species of Circaetus and have different proportions. The young have a strong resemblance to those of some forms of Spilornis, but again proportions and other details are different. The genus contains only one species in the forests of West Africa.

The crown and mantle are blackish brown, with brown sides to the neck and a broad brown collar. The rest of upper parts are dark chocolate brown. The tail is light brown with six broad blackish bars. The wing coverts are blackish, the lesser coverts tipped with white. The primary flight feathers are dark brown on outer web, light brown on inner, with a black tip and black bars. The cheeks are light brown, throat darker, and a black moustachial streak, and a black streak down centre of throat. Under parts are mostly white, with large round black spots. Mid-belly and under-tail coverts are pure white. The thighs are closely barred sepia and white. Under-wing again largely white, with some sepia and black spots and bars, the flights pale brown with darker bars. The eyes are dark brown or grey, cere yellow, legs and feet yellow. The sexes are similar in size.
In the immatures the crown and mantle are basally white, the terminal half of the feathers ferruginous, and the tips black. Under parts are closely spotted with round ferruginous and blackish spots, which disappear gradually with age.

Listen to the sound of Congo Serpent Eagle

Africa : West, Central. The Congo Serpent Eagle (Dryotriorchis spectabilis) can be found only in the forests of west and central Equatorial Africa as far south as Gabon.

Lowland tropical rain forest. This is a bird of dense evergreen forest, whose large eyes enable it to catch prey in the dim light of the forest.

The diet consists mostly of snakes and lizards, including chameleons and toads. There is some evidence of small mammals, but these could have been swallowed with snakes which had eaten them earlier. Food is taken on the ground, or in trees, probably by dropping on it from a perch.

This species has an extremely large range, and hence does not approach the thresholds for Vulnerable under the range size criterion (Extent of Occurrence <20,000 km2 combined with a declining or fluctuating range size, habitat extent/quality, or population size and a small number of locations or severe fragmentation). Despite the fact that the population trend appears to be decreasing, the decline is not believed to be sufficiently rapid to approach the thresholds for Vulnerable under the population trend criterion (>30% decline over ten years or three generations). The population size may be moderately small to large, but it is not believed to approach the thresholds for Vulnerable under the population size criterion (<10,000 mature individuals with a continuing decline estimated to be >10% in ten years or three generations, or with a specified population structure). For these reasons the species is evaluated as Least Concern.
Little is known about it, but it is said to be like the harriers in its habits (although this seems inappropriate in its forest habitat), and remarkable in appearance for its short wings and very long tail. It would seldom be observed were it not for the note which it utters at intervals of one second or so when perched in forest trees. It frequents the densest forest, perching usually on the larger, lower boughs. It is generally solitary.