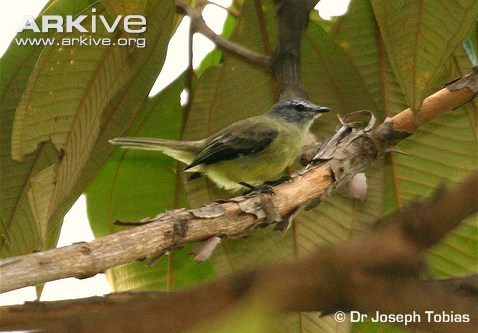 The Yungas Tyrannulet (Phyllomyias weedeni) is a species of bird in the Tyrannidae family. It is, as suggested by its common name, restricted to humid and semi-humid forest in the Yungas of north-western Bolivia and far south-eastern Peru. Although discovered in the early 1990s, it was only formally described in 2008. The species is morphologically and vocally most similar to widely allopatric P. fasciatus (Planalto Tyrannulet), but vocalizations recorded at the six localities from which it is known differ conspicuously and significantly from those of P. fasciatus, and differences in plumage and measurements are also apparent.
Vocalization analysis further suggests that the P. fasciatus complex, which comprises three named subspecies, may consist of more than one biological species. Phyllomyias weedeni inhabits the upper canopy of humid and semi-humid foothill and lower montane forest within a narrow elevational range (700-1,200 m). It appears to prefer irregularly structured canopy dominated by small-leaved trees but has also been found in a mosaic of shade-coffee (Coffea spp.) plantations and remnant forest patches. It occurs at low densities, is apparently patchily distributed, and has an estimated extent of occurrence of 10,000 km2. Its breeding population is estimated to be well below 10,000 mature individuals, and ongoing large-scale habitat conversion throughout much of the species’ range could pose serious conservation problems. The new species thus qualifies as globally “vulnerable” under IUCN Red List Criteria.
← Previous Post
Next Post →