Source to all birds on the Planet
Passeriformes, Vireonidae
Comments 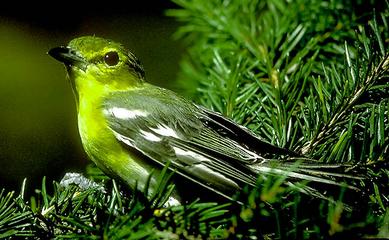 Adults have olive-green upperparts with a contrasting gray rump and bright yellow throat, breast and eye spectacles. The belly is whitish, and the wings are dark with two broad, white wingbars. This is the only species in the genus Vireo with a bright yellow throat
and white belly. The female and fledglings are paler than the male.

The yellow-throated vireo is a bird of the eastern United States and small portions of southern Canada during the breeding season. The breeding range has decreased locally in areas of forest clearing or extensive forest fragmentation or isolation, while expanding in central Florida. It winters primarily in southern Mexico, Central America and the top part of South America, with some records for the Caribbean islands. Afew individuals apparently
overwinter in southern Florida.

Listen to the sound of Yellow-throated Vireo

This species consumes a wide variety of arthropods, and may also take fruit and seeds in late summer, fall and winter. It forages slowly on tree bark and foliage, and it may occasionally capture aerial prey. Most of its foraging seems to take place in the middle
and upper forest strata, and studies have shown that males forage significantly higher than
females. While small prey is usually eaten quickly, larger items are often shaken vigorously or even beaten on a branch.

The unmated males may identify three or four possible nest sites and even place small amounts of nest material at some of these sites before females arrive on the breeding
grounds. They then display frequently at these sites to prospective mates. The nest is
usually in the upper crown of large trees, at least 3 meters off the ground. Both sexes build the nest, which takes about a week, and the male does some of the incubation. The nest is a rounded cup of bark strips, dry grasses, rootlets, plant down, leaves and animal hair bound together by insect silk and spider web. The 3 or 4 pinkish-white eggs are marked with brown at the large end. Both parents incubate the eggs for 14 days. The young leave the nest at 14 days of age. This species is a common cowbird host.

This species has a large range, with an estimated global Extent of Occurrence of 3,200,000 kmÂ². It has a large global population estimated to be 1,400,000 individuals (Rich et al. 2003). Global population trends have not been quantified, but the species is not believed to approach the thresholds for the population decline criterion of the IUCN Red List (i.e. declining more than 30% in ten years or three generations). For these reasons, the species is evaluated as Least Concern. (source Birdlife.org)

This species is a common summer resident of mature, open woodlands in all sections of North Carolina. It is a neotropical migrant that winters mainly in parts of Mexico,
Central America and northern South America. Neotropical (New World) migratory birds
migrate north each spring from wintering areas in Mexico, Central or South America, or the Caribbean. They breed during our summer in temperate North America and then fly south.
The yellow-throated vireo is a species primarily of the eastern United States.
Distribution map breeding season