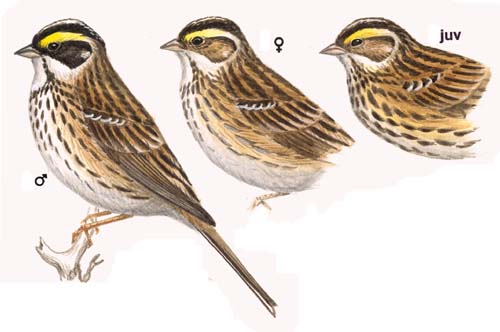 Blackish-brown streaks and variegated with chestnut, the hind neck greyer, the lower back, rump, and upper tail-coverts redder, with a tinge of chestnut; central rectrices brown, darker along the stem, and exteriorly edged with chestnut, rest of the tail blackish-brown, the outermost pair with a white wedge occupying the major part of the apical holf and part of base of the inner web and all the outer except a small narrow brown stripe at the tip, the penultimate with a narrow white apical wedge down the middle part of the feather; wings brown, the wing-coverts blackish, also the tertiaries, all edged with the colour of the; back, and the middle and greater coverts tipped with white : primaries edged whitish-grey, the secondaries with brown; chin and a malar stripe black; flanks and sides of breast chestnut-brown, the breast and flanks streaked with dark brown, rest of underparts white. The female is smaller, the black of the head is replaced by chestnut-brown the chin is white and the breast is more streaked. Iris brown, bill blackish on upper mandible and point of lower, base of latter flesh-coloured; legs fleshcoloured.

It breeds in eastern Siberia, and is migratory, wintering in central and southern China. It is a very rare wanderer to western Europe.
No sound impression of Yellow-Browed Bunting

Breeds in taiga forests of deep interior of south-east Siberia, inhabiting pines and larches, and also thickets in shrub layer, apparently in lowlands, shifting to similar habitats elsewhere for winter.

The adults’ diet consists of seeds, but they feed insects to nestlings.

The Yellow-Browed Bunting breeds in the taiga zone, and lays four eggs in an arboreal nest.

This species breeds in Eastern Siberia and probably in Manchuria and winters in Fukien and in the Lower Yangtse Valley.
Distribution map breeding season