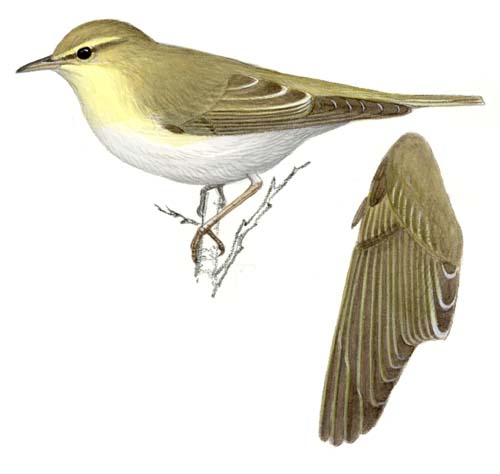 Phylloscopus sibilatrix is a widespread summer visitor to much of Europe, which
constitutes >75% of its global breeding range. Its European breeding population is
extremely large (>14,000,000 pairs), and was stable between 1970-1990. Although
most populations in eastern Europe remained stable during 1990-2000 (the trend of
the key population in Russia was unknown), the species declined in the north and
west, and underwent a moderate decline (>10%) overall. Consequently, this previously
Secure species is now provisionally evaluated as Declining.

Listen to the sound of Wood Warbler

Breeds in temperate and boreal west Palearctic in middle and upper middle latitudes. Largely in continental but marginally in oceanic climates, preferring hilly terrain to flat plains. Breeds regularly in Alps up to 1300 m, and exceptionally rather higher. Requires moist and shady woods with closed canopy and no or sparse undergrowth, being a typical bird of wood of beech, but often found also in mixed oak and hornbeam, sweet chestnut,spruce and mixed woodlands.

Mainly insects and other invertebrates, with some fruit and seeds in autumn. Picks items off leaves and other parts of trees and bushes while moving through foliage, sometimes fluttering, frequently hovering, or by making longer flycatching sallies.

Breeds May to mid June in western and central Europe, last third May to early July in Finland. Nest site is built on ground in vegetation, sometimes wedged under fallen tree or branch. Often in slight depression usually made by bird.
Nest, domed structure of dry grass leaves and stems and other plant material, including bark, lined with finer grasses and hair. 5-7 eggs are laid, incubation 12-14 days, by female only.

This species has a large range, with an estimated global Extent of Occurrence of 10,000,000 kmÂ². It has a large global population, including an estimated 28,000,000-43,000,000 individuals in Europe (BirdLife International in prep.). Global population trends have not been quantified, but the species is not believed to approach the thresholds for the population decline criterion of the IUCN Red List (i.e. declining more than 30% in ten years or three generations). For these reasons, the species is evaluated as Least Concern. (source Birdlife.org)