Source to all birds on the Planet
Columbidae, Columbiformes
Comments 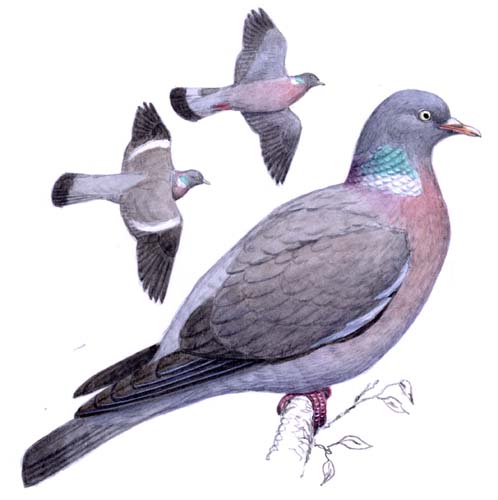 Columba palumbus is a widespread breeder throughout Europe, which constitutes
>75% of its global breeding range. Its European breeding population is very large
(>9,000,000 pairs), and was stable between 1970-1990. The key populations in
Germany and the United Kingdom increased during 1990-2000, and the species
increased slightly overall.

Listen to the sound of Wood-Pigeon

Typically a species of ecotone in deciduous or coniferous woodland, sometimes up to tree-line in the Alps. In C Eurpe breeds on edge of old mixed pine and oke forests. In other places found in ash forests, also inhabits plantantions of exotics notably Sitka spruce and Douglas fir.

Most of diet made up of plant matter, including green leaves, buds, flower, seeds, berries and root crops.
Various invertebrates are also occasionally eaten, including earthworms, gall wasps, beetles, pupae of lepidoptera, spiders, slugs and snails.
Takes most of food from ground, but also feeds in trees.

Nest consists of twigs, grasses and leaves. Nest become bulkier with repeated use. Placed up to 3 m above ground in fork of tree or on branch,in a creeper in tree, or rarely on ground in thick vegetation or under a hedge. 1-3 white eggs, incubation 17 days.

This species has a large range, with an estimated global Extent of Occurrence of 10,000,000 kmÂ². It has a large global population, including an estimated 18,000,000-34,000,000 individuals in Europe (BirdLife International in prep.). Global population trends have not been quantified, but there is evidence of a population increase, and so the species is not believed to approach the thresholds for the population decline criterion of the IUCN Red List (i.e. declining more than 30% in ten years or three generations). For these reasons, the species is evaluated as Least Concern. (source Birdlife.org)

North and East European birds mostly migratory, as are West Siberian populations; species partially migratory or resident in West, Central & South Europe. Populations living in middle Atlas Mountains of Morocco fly daily to plains to feed, although some individuals may forage only 15 m from the nest.
Distribution map breeding season