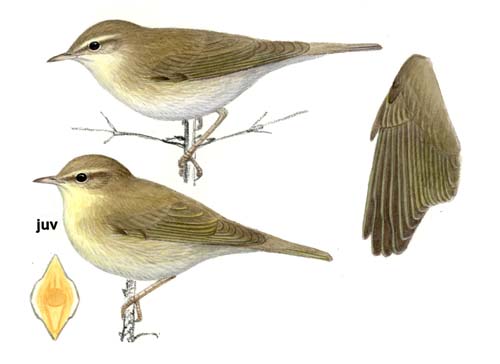 Phylloscopus trochilus is a widespread summer visitor to much of Europe (except the
south), which accounts for less than half of its global breeding range. Its European
breeding population is extremely large (>56,000,000 pairs), and was stable between
1970-1990. Although there were declines in a number of countriesâ€”notably Sweden
and Finlandâ€”during 1990-2000, populations were stable in Russia and across much
of central and eastern Europe, and the species underwent only a small decline overall.

Listen to the sound of Willow Warbler

Breeds in west Palearctic in middle and upper latitudes within temperate and boreal climatic zones, continental and oceanic. Differs in being a bird less of mature woodland than of scrub, second growth, and transitions to more open habitats.
Unlike P. collybita, will readily settle on shrubby, bushy, to cleared ground starting regrowth, even in absence of trees. Thus attracted to fringe areas such as birches beyond arctic taiga, heath lands, or forest clearings.

This species has a large range, with an estimated global Extent of Occurrence of 10,000,000 kmÂ². It has a large global population, including an estimated 110,000,000-200,000,000 individuals in Europe (BirdLife International in prep.). Global population trends have not been quantified, but the species is not believed to approach the thresholds for the population decline criterion of the IUCN Red List (i.e. declining more than 30% in ten years or three generations). For these reasons, the species is evaluated as Least Concern. (source Birdlife.org)