Source to all birds on the Planet
admin
folklore, Latin America, Steatornithidae
Comments

In the province of Cumana are several lofty mountains, the highest of which is Tumeriquiri. In this mountain is situated the cavern of Guacharo, which is celebrated among the Indians. It is very extensive, and serves as a living environment to an immense number of nocturnal birds, especially the Oilbird or Guacharo, from the fat of which is procured the oil of Guacharo. From this cavern springs a river and in the night the doleful cry is heard of the birds which the Indians attribute to the souls of the deceased, which according to them, must pass through this place in order to enter the other world. This privilege they immediately obtain when their conduct has been good throughout life. In the contrary case they are confined for a longer or shorter time in the cavern, according to the magnitude of their offences.

The following legend, current among both Caribs and Arawaks is of special interest because the Oilbird is derived from the head of the Spirit itself:

A man went out hunting for land crab, and was waiting for the rain to fall, because it is only under this condition that the animal creeps out of its hole into the swamps. Now, when the rain fell, it wet his hair; to protect himself, the huntsman, using his calabash like a cap, pressed it firmly down upon his head, so that but a little of the hair projected from beneath its circumference. Just then a Konoko-kuyuha put in an appearance, and seeing the man in disguise, and not knowing what it was, could not help exclaiming, “What a fine smooth head you have! How did you manage to get it?” The man told him that he had just taken a knife and cut his head all the way round, and that if he wished he would gladly do the same for him. The Spirit was delighted, and allowed the skin all round his head to be cut, and peppers to be rubbed over the raw surface to make it heal the quicker; the latter process, however, caused him to groan in pain, but by this time the huntsman had quietly slipped out of sight.

A long time afterward, many years in fact, the same man, going out into the bush close to the neighborhood where the above event had occurred, met the same Konoko-kuyuha, whom he recognized by the peppers on his head, which had grown into big bushes. The recognition was mutual, and the Spirit reproached him after this manner: “You are the man who peeled off my head. I will kill you.” The Spirit said “It was you that peeled my head. It was you that punished me. How do jou like to hear your own bones rattling for music?” But the man replied: “No. You are mistaken. The person who really did it has been dead a long time. Come with me and I will show you his bones.” And he led him to a place where there was a stack of deer bones. He then said to the man, “Let us dance, and make his bones rattle.” Whereupon they both started dancing, and while dancing they sang the song of the Spirit. 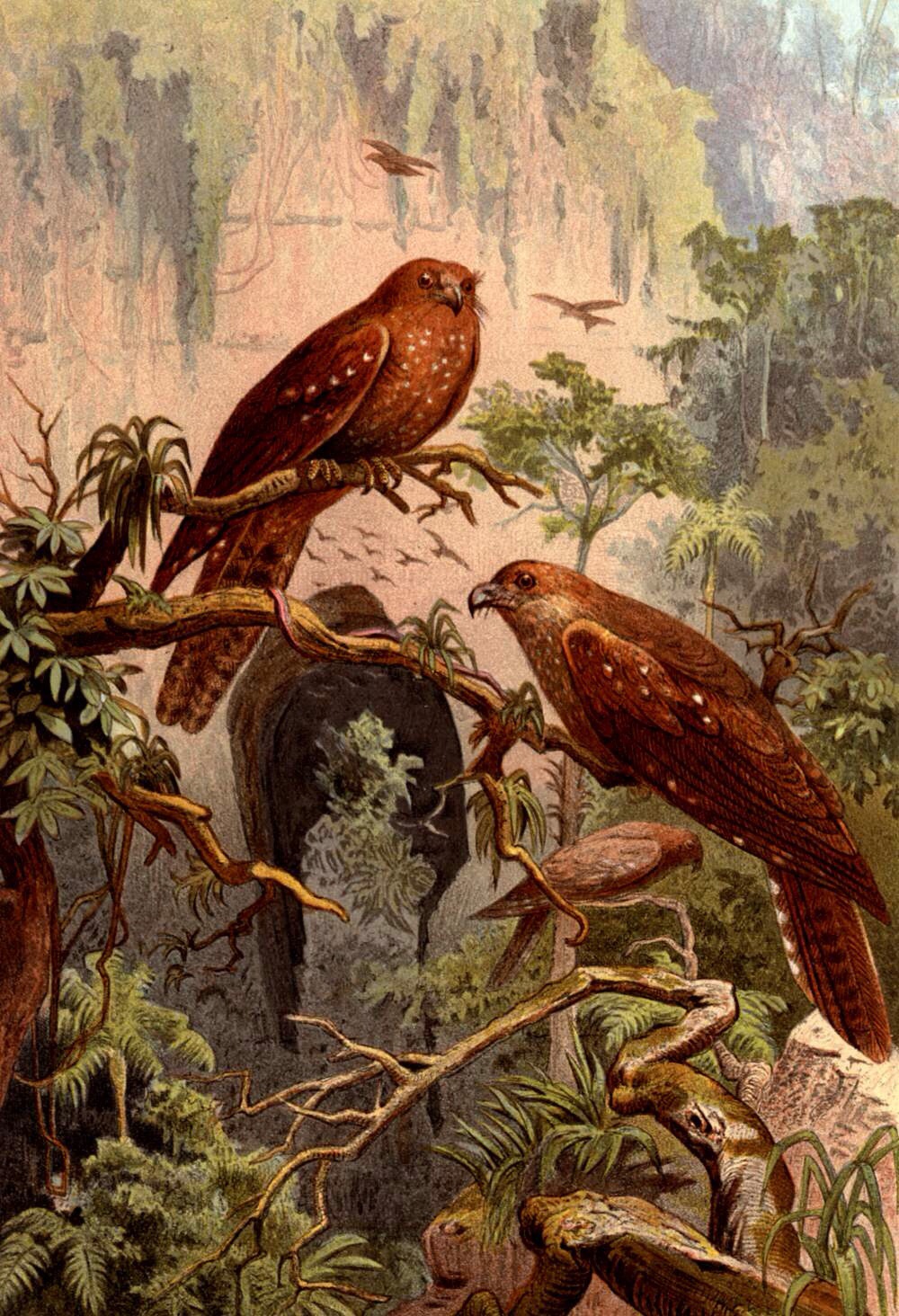 After a time, the man remarked “This is not a good place to dance. Come over there where I can see a fine Hat baking-stone that will suit better.” So they shifted their quarters, and the Spirit recommenced dancing on the flat stone. “Bend your head lower,” said the man, “you are not doing the figure properly.” So the Spirit bent his head lower, but his companion told him that even this was not low enough; so he tried again, and directly he had bent his head quite close to the stone upon which he was dancing, the man suddenly crushed it thereon. The Spirit’s brains thus were scattered, and from each piece there ‘grew’ a wokorai-yu (goat-sucker). This is why we Indians always dread these birds, and leave them severely alone; they come from the Spirits of the Bush, and give us warning of evil, a token that we may expect trouble of various sorts.