One autumn day ages and ages ago, the cranes were preparing to go south. Cranes always dreaded the cold and flew away to the summer-land at the first glitter of the frost.
The crane leader had a loud, hoarse voice, and he called and called to his flock to hurry. The cranes came from all directions at the call of their leader. The father and mother cranes came. The old cranes came and the young cranes came. Even the babies, whose feathers were scarce grown, came flying at the call of the leader.

All the cranes were happy, for they were going to the summer-land. They were glad to go, for already the frost jewels sparkled on the brown grasses and the cold winds were beginning to blow.
“Come! come!” cried the crane leader, and his voice was hoarse with shouting. “Come! It is full time we were off!”
Young and old spread their wings for flight. They waited a moment for their leader to take his place. As they waited the cranes glanced down to the cold, bare country which they were about to leave.

Thus looking down, the cranes saw a beautiful maiden standing alone at the edge of the village.
“How lovely she is!” said the crane leader. “And how lonely she seems!”
“How thin her dress is!” said another crane.
“See, she is weeping!” cried a third. Just at that moment the maiden looked up and saw the flock of cranes above her.
“Oh,” she cried, “you are going to the summer-land. I wish I had wings. I would fly away with you!
“Alas! in this cold, cheerless Northland I shall starve and freeze. I have no home. I have no friends. 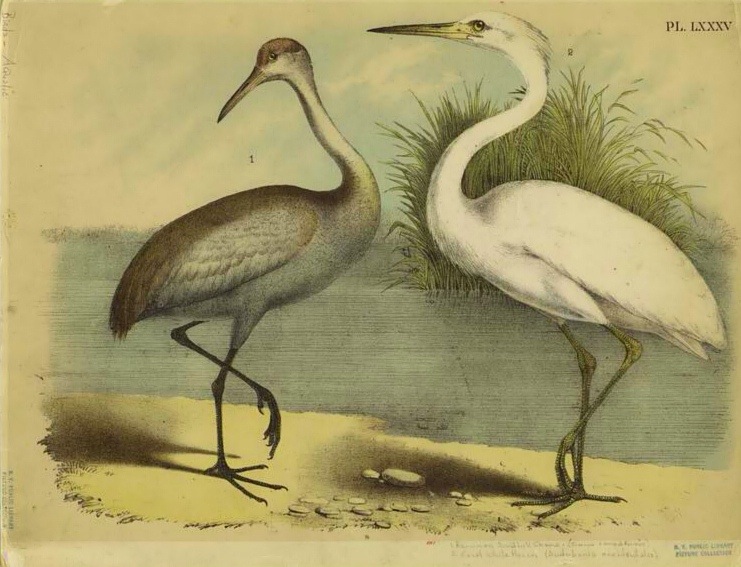 “There is no oil in my stone stove! There is no meat in my kettle. What shall I do when the thick snow flies and the winter winds cut like knives?”
The crane leader looked down at the beautiful maiden in pity. The whole flock, young and old, were filled with a wish to help the girl. It was very sad, they said, that one so young and lovely should ever be cold or hungry or unhappy.
“Let us carry the maiden with us to the summer-land!” whispered a young crane.
“Yes, let us take her to the land of ever-lasting summer,” begged an old crane.
“There she might gather food from the grain-fields. She might pick berries by the roadside. She might drink from the clear, cool brooks that run to the sea,” said the leader.
Following their leader, the whole flock swept down to the earth. They gathered about the lovely, lonely maiden.
They lifted her on their widespread wings and bore her up into the air.
The maiden’s long dark hair floated out like a cloud. She smiled happily as the cranes with one voice told her of the summer-land to which they would carry her.

With wings outspread, that she might not fall, the cranes bore the maiden away. Day and night, night and day, they carried her and never seemed to tire.
And the maiden had no fear. She laughed in sheer happiness when they told her again and again of the beautiful country to which they journeyed.
For into that land, the cranes told her, neither cold nor hunger came. They would show her the richest grain-fields. They would tell her where the sweetest berries grew. They would show her wondrous blossoms which grew for her in the distant summer-land.
The beautiful maiden was never again seen in the cold, dreary Northland, for to this day she wanders beside the sweet-voiced streams in the far-off summer-land.
But season by season the cranes, with wide-spread wings and hoarse cries, return to the Northland at nesting-time.
There they remain through the short sunny summer, but when the first snowflakes flutter through the air the cranes prepare to fly away.
And even to this day they circle about on widespread wings as though they again carried the beautiful maiden.
Even to this day the cranes, young and old, shout so loudly the praises of the summer-land that their voices are hoarse and harsh.