Source to all birds on the Planet
Charadriiformes, Laridae
Comments 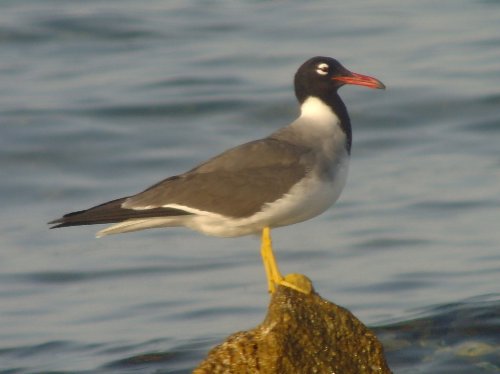 Adult White-eyed Gulls have a black hood in breeding plumage, which extends down onto the upper throat, and on the neck-sides is bordered below by a narrow white bar. The upperparts and inner upperwings are medium-dark grey; the breast is mid-grey but the rest of the underparts are white. The secondaries are black with a white trailing edge, and the primaries are black. The underwing is dark, and the tail white. Adults in non-breeding plumage are similar, but the hood is flecked white small white spots.

The White-eyed Gull acquires adult plumage at two to three years of age. Juvenile birds have a very different plumage – chocolate brown on the head, neck and breast, and with brown, broadly pale-fringed, feathers to the upperparts and upperwings, and a black tail. In their first Winter, birds acquire greyer feathering on their head, breast and upperparts; the second-winter plumage is closer to that of the adult, but lacking the hood.

A distinctive feature of White-eyed Gull at all ages is its long slender bill. This is black in younger birds, but in adults it is deep red with a black tip. The legs are yellow – dullest in younger birds, brightest in breeding plumaged adults. The eye itself is not white; the bird takes its name from white eye-crescents, which are present at all ages.

The species is mainly coastal, although often occurs further out to sea in the non-breeding season. It usually feeds at sea, but some Egyptian populations have adopted a scavenging role at rubbish tips and harbours.

The white-eyed gull consumes mainly fish, but will also take crabs, molluscs and worms and even some fruits. It plunge-dives at the water surface, far out to sea, and may also scavenge in harbours. It has been known to gather into foraging flocks of hundreds or even thousands of individuals

Its nest is a shallow scrape, lined with seaweed and debris, located on bare rock, sand or exposed flats. Egg-laying takes place mainly in July, with hatching complete by late August. It lays two or three eggs.

This species is listed as Near Threatened because it is expected to experience a moderately rapid population decline in the next three generations (33 years) owing to a number of threats including introduced predators, oil-spills, the harvest of eggs and chicks and disturbance. If the population was found to be declining more rapidly, the species might qualify for a higher threat category. (source Birdlife.org)

Found in the Red Sea from the Gulf of Suez and Gulf of Aqaba to the Gulf of Aden (2), the white-eyed gull breeds in Egypt, Sudan, Eritrea, Djibouti, Saudi Arabia, Yemen, and Somalia. The wintering birds migrate within the breeding range
Distribution map breeding season