Source to all birds on the Planet
Gruiformes, Rallidae
Comments 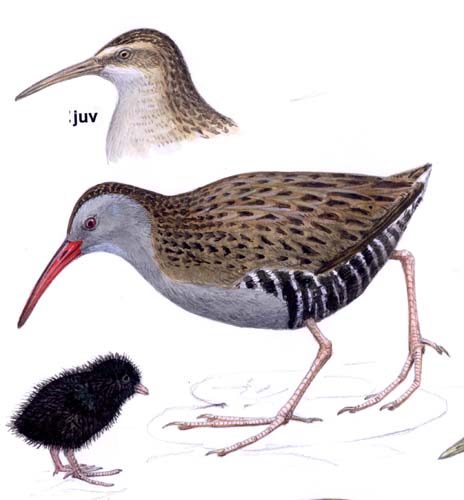 This rail inhabits wetlands in a major part of Eurasia, from Iberia, Iceland and southern Scandinavia to Iran, China and eastern Siberia. The birds of the south and the west of that area are largely sedentary. Those of northern and eastern Europe are migratory and winter in the south-west of the continent. Nearly all populations are adversely affected by the destruction of wetlands, and the species is showing an overall decline

Listen to the sound of Water Rail

Any type of dense riparian and aquatic vegetation at still or slow-moving water.
Breeding habitat includes reedbeds and other emergent vegetation of swamps, marshes and fens.
Mainly lowland, but resident up to 2000 meter.

This species has a large range, with an estimated global Extent of Occurrence of 10,000,000 kmÂ². It has a large global population, including an estimated 290,000-730,000 individuals in Europe (BirdLife International in prep.). Global population trends have not been quantified, but the species is not believed to approach the thresholds for the population decline criterion of the IUCN Red List (i.e. declining more than 30% in ten years or three generations). For these reasons, the species is evaluated as Least Concern. (source Birdlife.org)