The Redwing inhabits during the summer season the far north, but so soon as the cold weather sets in migrates southward, spreading over the whole of Europe, returning again to its northern haunts in the spring. It has been met with as far west as Greenland where it has twice occurred. The Redwing has not been recorded from Egypt; but, according to Loche, it arrives in Algeria in the autumn and remains only two or three months, frequenting, in large flocks, the wooded parts of the country. It has been recorded as far west as the Canaries, where, according to Berthelot, it occurs during the winter.

With regard to the limit of its eastern range, it has been found in Eastern Siberia by the Russian traveller. Like all the Thrushes, the old birds show the greatest anxiety if one approaches their nest or young, make a peculiar noise by striking together their mandibles, utter a mournful cry, flutter on the ground, and allow one to approach within a pace or two of them. The foundation of the nest consists of dried twigs and earth, and the nest itself of dry straws. The eggs are almost always six in number; they are deposited from early in May into June. The food of the Redwing consists during the spring and summer chiefly of insects, and especially of the various species of Helix; during the autumn and winter, however, they feed on the various sorts of wild berries, and such insects as they can procure at that season of the year. 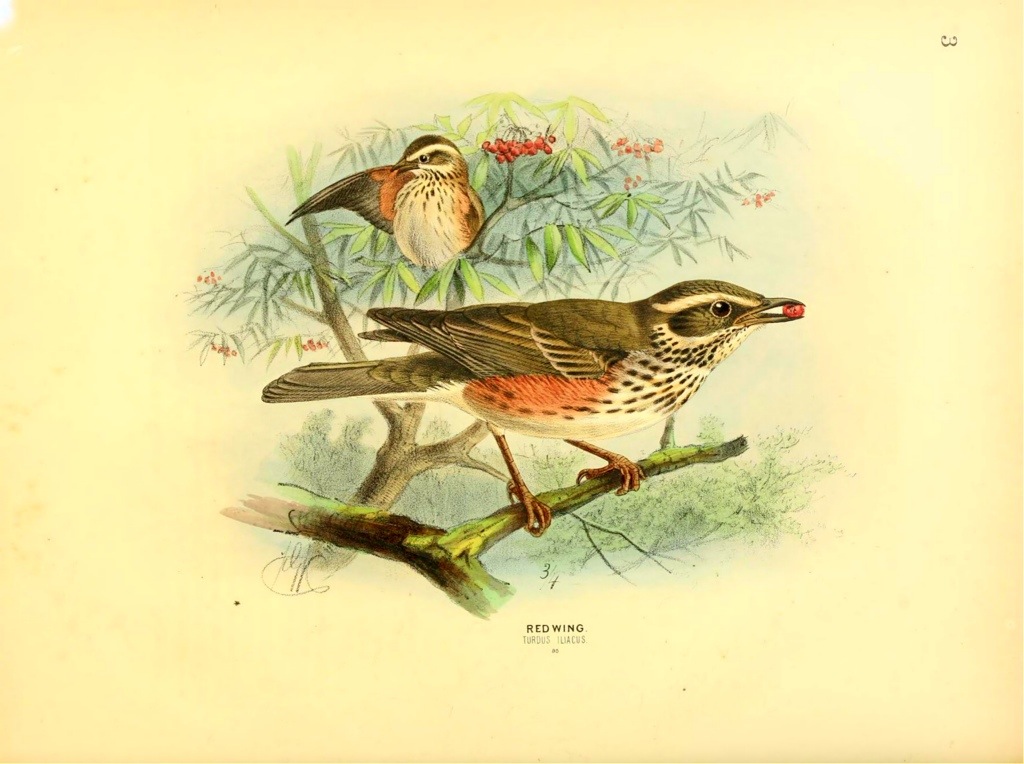 Adult, summer. Above olive-brown ; wing-coverts edged with greyish brown : quills dark brown, the outer web edged with dark grey, the secondaries rather more so than the primaries; tail similar to the back ; a broad line from the beak passing above and behind the eye to the back of the head dull white; region below the white eyebrow and auriculars olive-brown marked with white; throat white with brown stripes on each side; underparts white, the breast and sides marked with brown streaks, the centres of the feathers being brown; flanks and under wing-coverts rich rust-red; under tail-coverts dull brown at base, white at the tip; bill blackish brown; base of under mandible and edge of gape reddish yellow; legs greyish flesh-colour; iris brown. Female. Similar to the male.