I have looked in vain for a name and description of this very familiar species, which is quite as common in our collections as the Thaumatias leucogaster. The only published figure which at all resembles the bird is that given by Lesson, under the appellation of Omhmya albirostris, in his ” Histoire Naturelle des Oiseaux Mouches;” the name, however, does not apply to the species, since its bill is black, and this colour even extends over both mandibles. It would seem that Lesson’s figure was taken from a made-up bird formed out of two speciesÃ¢â‚¬â€the head and body of T. leucogaster and the tail of the T. chionopectus ; with this doubt on my mind as to the value of Lesson’s figure, I have no other alternative than to propose a name for the bird here figured, which is a native of Trinidad and Guiana, and which is sent from the former country in the greatest abundance.

It is an extremely pretty species, and is most nearly allied to T. leucogaster ; it differs, however, from that bird in its smaller size, in having a black bill, a purplish bronzy tail, and in the greyer tint of its under tail-coverts. The adult male has the crown of the head and sides of the neck beautiful glittering green, exhibiting a strong contrast to the snowy whiteness of its throat and breast. The female is very similarly coloured to the male, but she is somewhat smaller in size, rather less brilliant in colour, and has the three outer tail-feathers tipped with greyish brown. I am indebted to the liberality of Mr. Tucker of Trinidad for several beautiful specimens of this bird. This gentleman informs me, that it is there known by the name of ” White-throat,” and that it is very generally dispersed over the island, particularly where the wild tobacco grows, from the flowers of which plant it obtains a great part of its insect food. The Plate represents the birds of the natural size. The plant is the Goethea strictiflora. 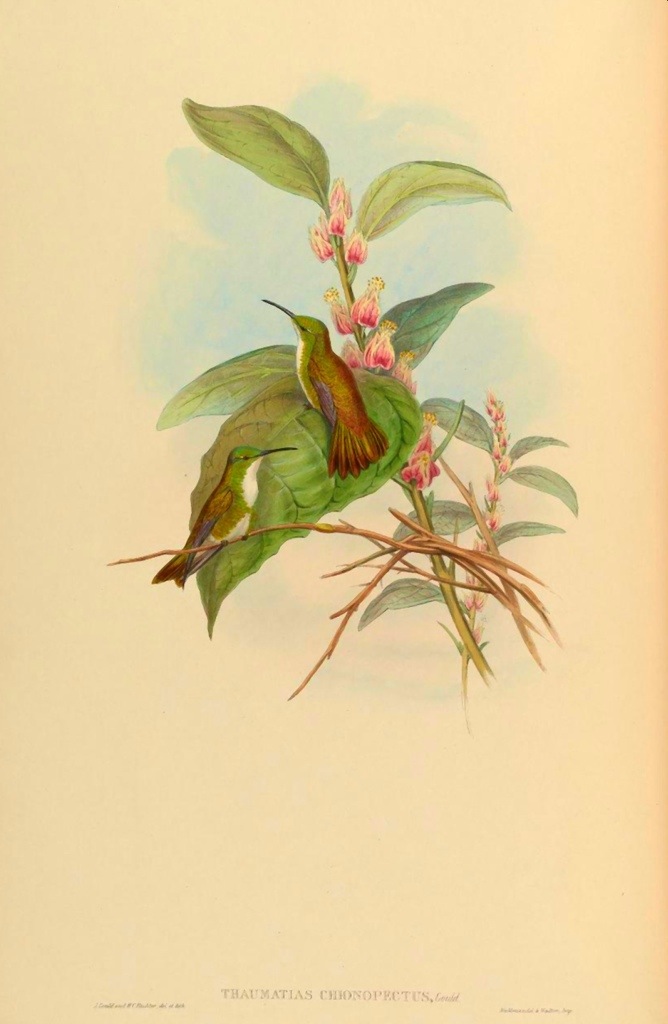 The male has the crown of the head and sides of the neck glittering green ; upper surface and wing-coverts bronzy green, becoming coverts; wings purplish brown; tail purplish bronze, with an obscure band of a darker tint near the tip, which is somewhat more perceptible on the under than on the upper surface; throat snowy white; centre of the abdomen white; flanks golden green; feathers forming the under tail-coverts grey with lighter edges ; bill black ; feet blackish brown. The female is very similar in colour, but is less brilliant, and has the three outer tail-feathers tipped with greyish brown.