In 1902 this Thrush was called Whites Thrush, Turdus Varius, it said:

Although an inhabitant of Eastern Asia, this Thrush has frequently straggled to various parts of Europe, and as far west even as Great Britain, where it has been captured on at least nine occasions. The first recorded British-killed specimen appears to be that shot by the late Lord Malmesbury at Heron Court, near Christchurch, on the 24th January 1828, and described as new by Mr. Eyton under the name of Tardus whitei. In Asia this Thrush is chiefly met with in the far east. It does not appear to occur in India; and though found in Western Siberia, it is but rare there. But little is known respecting the habits of this rare bird.

Its position is highly favourable for the growth of timber and fruit trees; and it is well shrouded in orchards and small enclosures, fringed with their hedge-rows and ivied elms, affording a favourite haunt for many of the smaller birds, with a good supply of cherries and other fruits in the summer months, and of berries through the autumn and winter seasons. Although Blackbirds, Thrushes, and Missel-Thrushes were abundant, and seen at the same time feeding on the ivy and hawthorn berries, the present bird was always observed to resort only to the trees or hedges when disturbed, and then merely to a place of rest, remaining for some time perched in an upright position in one spot, without noticing the berries or the species feeding on them. Its flight when roused from its feeding was very undulating, like that of the Green Woodpecker, and low, often settling on the ground, and only making choice of a tree when it happened to pass under one, into which it rose almost vertically. The breeding-habits of this Thrush are scarcely known. 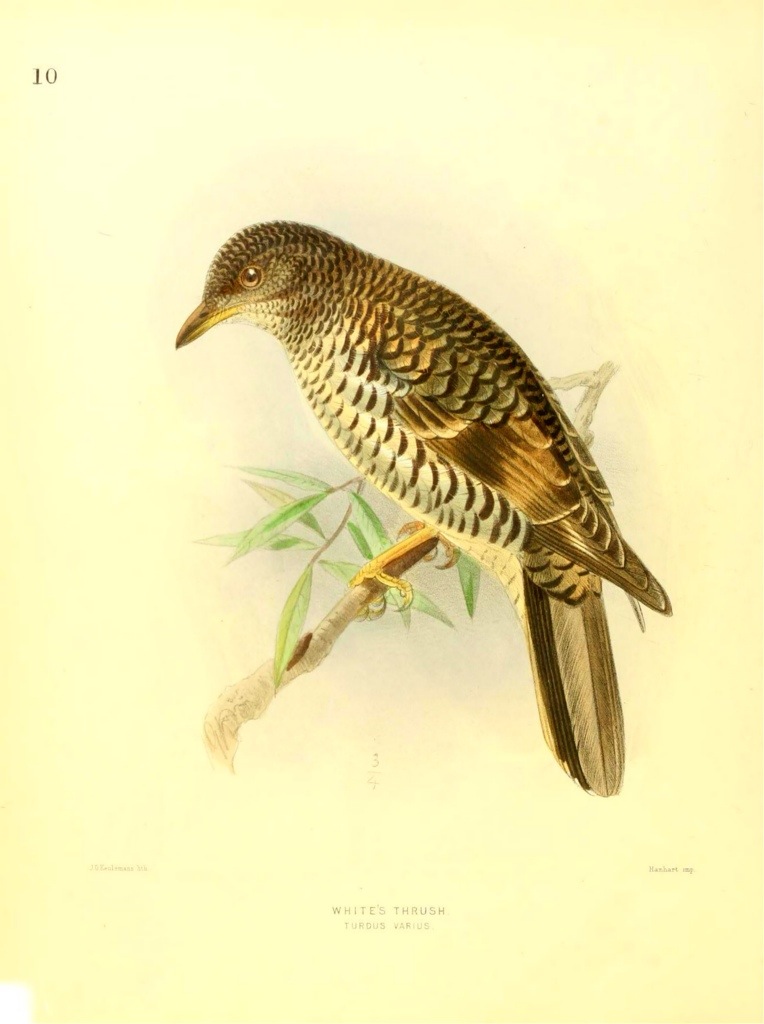 Adult Male. Crown and upper parts generally wood-brown, the feathers with a crescentic tip of black and a subterminal ochraceous brown band; quills pale browu on the outer and brownish black on the inner web with dark-brown tips and black shafts; lesser wing-coverts blackish tipped with pale yellowish, the larger coverts dark brown with light-yellowish-brown tips, forming two obliquely descending bars; feathers of the spurious wing light yellowish brown tipped with black, forming an ascending oblique bar; fourteen rectrices, the central four pale uniform brown, the next three on each side blackish brown with narrow light tips, the remaining two on each side broadly terminated with light brown and tipped with dull white; chin and throat white; sides of the head and neck spotted with black; underparts white, breast and flanks tinged with yellowish brown, the feathers with black crescentic tips ; under tail-coverts white; anterior under wing-coverts white tipped with black, a white band crosses the under surface of the wing; bill dark brown, yellowish at the base; iris dark brown; legs pale brownish flesh-colour.