In the usual acceptation of the term this is one of the commonest species of Humming-bird with which we are acquainted; in using the word commonest, I intend to convey that it is a bird which has long been known and sent to Europe in great abundance ; all other species will, however, doubtless become equally common when their native localities have been discovered and the collector has played an equal part in procuring examples: we have ourselves evidence of this in what has occurred with regard to several species inhabiting the neighbourhood of Bogota, which ten years ago were scarce in our collections, but have since been sent in thousands. As might be supposed, the synonymy of these earlier known species is in great confusion, and most difficult to unravel. I am indebted for the list given above to M. Bourcier, from whose thorough acquaintance with the subject I have no doubt it is to be depended upon.

The native country of the bird is Cayenne, Demerara, the forests bordering the mouths of the Amazon, and the northern parts of Brazil as far as Bahia; at least such would appear to be the case, as I have specimens in my collection from all these localities which offer no marked differences from each other. The only variation in the outward appearance of the sexes, appears to consist in the female being somewhat smaller in size, less brilliantly coloured than the male, and in having the outer tail-feathers tipped with bronzy brown. Next to T. albivenvtris, this is the largest member of the genus yet discovered, and may be distinguished from the whole of them by its fleshy-white under mandibles and the whiteness of its throat, the centre of its abdomen, and the under tail-coverts, which latter is strongly contrasted with the dark colouring of the under part of the tail itself. The figures are of the natural size. The plant is the Adenocalymna comomm. 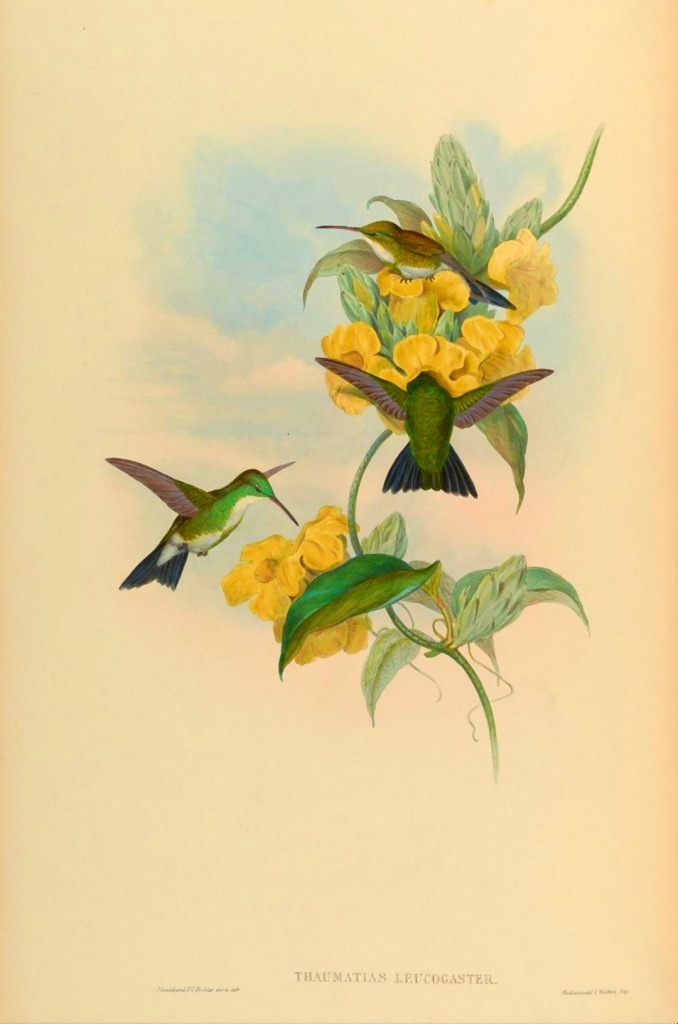