Source to all birds on the Planet
admin
vintage
Comments

This well-known species is distributed over the entire Paltearctic Region, although of very rare occurrence in the extreme eastern portion. In Western Europe it is migratory to a very great extent, although in some countries a resident species. When on the ground, and in the attitude of observation, it droops its wings a little, keeps its tail nearly horizontal, and raises its head obliquely. On observing a worm or other object, it leaps briskly towards it, picks it up, or, if it has withdrawn, pecks at the earth until it has seized it. Its general mode of progression on the ground is by leaping. When in a listless mood it droops the tail and wings, draws in its neck, and ruffles its feathers. In this attitude it may often be seen perched on a tree, bush, or stone. Its food is chiefly found on the ground, and consists of snails, earthworms, larvae, coleoptera, hips, berries, and seeds of various kinds.

Nearly all our writers on the same subject state that the nest of the Thrush is plastered with cow-dung; I am very much inclined to think that they are mistaken, and that if the material is ever used, it is in very rare instances only. Amongst a large number of the nests which I have examined, when the plaster was yet freshly spread, there did not appear to be any thing besides clay, in which were mixed up small pieces of rotten wood, forming together, when dry, a composition which in many instances is completely water-tight. When the spring has been a wet one, I have frequently found the newly finished nests half full of water, either causing their abandonment by the birds or delaying them some days from laying their eggs. In a few nests I have noticed particles of reeds and thistle-down mixed with the clay instead of rotten wood. 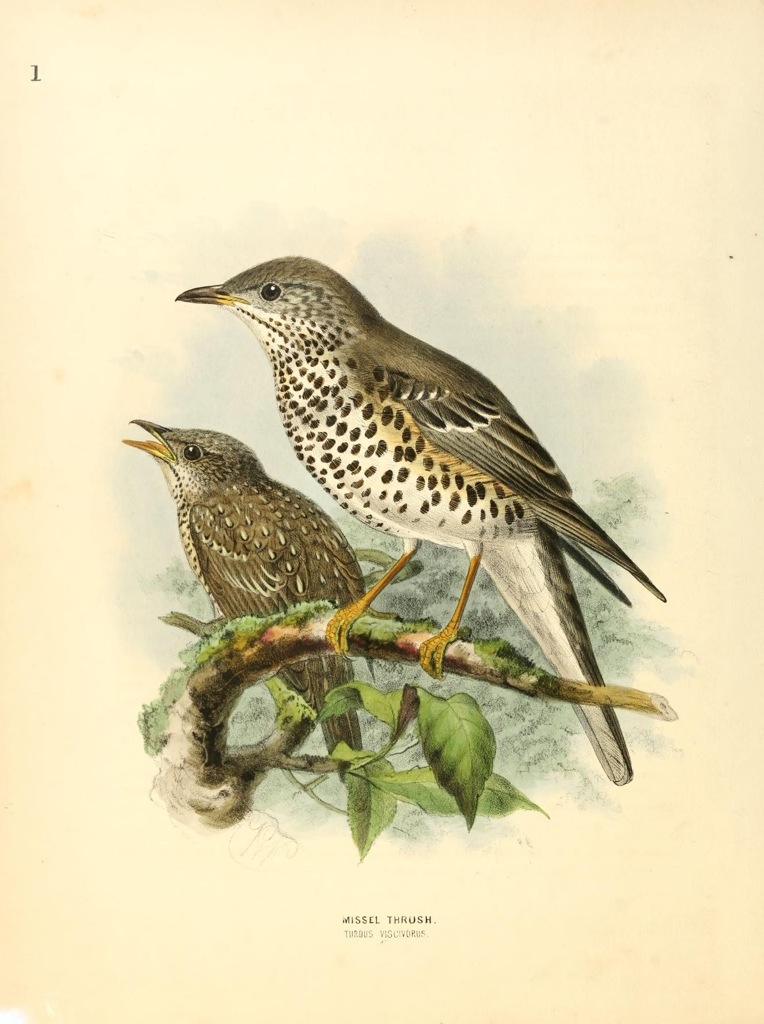 Adult Male. Above greyish brown, slightly inclining to olive-brown here and there, and very distinctly washed with golden, especially on the rump, where some of the feathers are edged with whitish ; least wing-coverts coloured like the back, the median ones tipped with white forming an irregular alar bar, and the greater ones edged with whitish on the outer margin of the feather, which is in some instances also tinged with golden; quills dark brown, the primaries externally edged with golden, shading into white towards the tip of the feather; the secondaries margined with golden, the innermost ones with whitish; tail greyish brown edged with golden, becoming white towards the tip of the feather, the two outer feathers conspicuously tipped with white, which colour is spread more over the inner web than the outer, the greater part of the outermost feather greyish, more or less inclining to white; the shafts brown above, white beneath; lores and feathers round the eye forming an indistinct eyebrow whitish; ear-coverts and sides of the neck greyish brown, tinged with whitish, and longitudinally marked with darker brown ; a faint moustache buffy white with a few little triangular spots of brown ; throat white, dotted with little spots of brown, which increase in size towards the breast, and are especially thick on each side of the throat; rest of the under surface of the body white, more or less tinged with buff or golden colour, thickly covered with blackish spots, which are triangular on the upper breast, and oval on the lower part of the latter and the abdomen; under wing-coverts pure white; bill dark horn-brown, yellowish at the base near the nape; feet yellowish; iris dark brown. Female. Exactly similar to the adult male, but perhaps not so brightly coloured, and the spots on the breast more brown. We have, however, seen individuals sexed as females which were as brightly coloured as ordinary adult males; and we suspect that, when fully mature, there is no difference between the sexes.