In 1902 this Thrush was called the Dark Thrush or the Dusky Thrush, it said:

In Asia this Thrush has a wide range: and its true habitat is there; for it is only known within the limits of the western Palaearctic Region as a rare and occasional straggler. According to Professor Schlegel it has once occurred in Holland; and Baron Fallon says that it has been met with once or twice in Belgium ; and one, in the collection of Baron De Selys Longchamps, was picked up in the Namur market amongst some common Thrushes by M. de Lafontaine. Until quite lately but little was known about the habits and nidification of the present species.

This Thrush is a very poor songster, but he has a splendid voice.
He seldom gets beyond two or three notes; but in clearness and richness of tone the few he utters are fully equal to those of the Blackbird.
During the nesting-season it inhabits valleys overgrown with larch, fir, and the cembra pine. It nests on young free-growing fir or larch trees, the nest being placed in a fork or on the boughs near the main stem, at an altitude of about 3 to 5 metres. It is constructed of dried grasses and weeds, worked together with earth, and lined with fine grass and dry larch needles, and is neatly and firmly built. It was exactly like that of a Fieldfare, but was carefully lined with mud before the final lining of dry grass was placed in it. 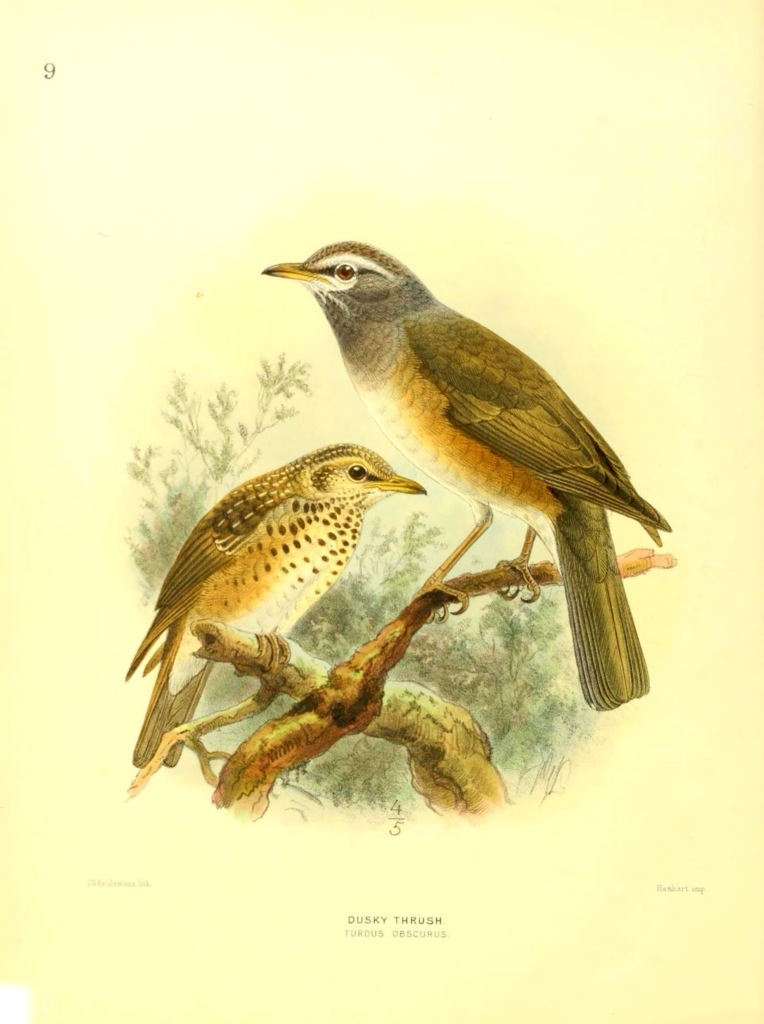 Adult Male. Crown and nape dark slate-brown; back, wing-coverts, scapulars, and rump warm olivaceous brown; tail dark brown, the outer tail-feathers on each side with a narrow whitish tip; quills dark brown, with narrow olivaceous external margins; a distinct stripe over the eye, chin, and a wide patch under the eye joining the chin pure white; rest of the head and neck slate-grey, the lores and the upper throat and ear-coverts darker; breast and flanks dull orange-buff; rest of the underparts white; the under tail-coverts blotched with greyish brown; upper mandible blackish horn; lower mandible yellow, tipped with horn; legs fleshy brown; iris dark brown.
Adult Female. Differs from the male in having the upper parts duller; the slaty tinge on the head and neck is wanting, these portions being brownish; eye-streak yellowish white; chin and throat dull white, this colour extending onto the sides of the neck; a broad streak of brown passes down each side of the throat from the gape; rest of the underparts as in the male.