The range of the members of the genus Cyanomyia extends over many degrees of latitude, or from Mexico to Peru, but all are inhabitants of temperate regions, none ascending to the snow-line, or descending to the sultry plains below. The C quadricolor of Mexico may be regarded as the species which proceeds far farthest towards the north, and the present bird (which is found in Peru) to the south. For the specimens I possess I am indebted to M. Warszewicz. How much has science been enriched by his researches, and how often have I had to speak in terms of commendation of the energy and perseverance of this celebrated traveller!

The nearest ally of the Cyanomyia cyanocollis is the C. Francice ; but it may be readily distinguished from the latter species by the blue tint of the sides and nape of the neck, those parts partaking of the same hue as the crown. It is most interesting to observe how wonderfully Nature has varied the specific characters of this group of birds, characters which mainly depend upon a difference in colour and markings: thus, two of the Cyanomyia have the nape of the neck brought prominently before our notice by the brilliant colouring of this part, and two others by the uniform whiteness of their under surface, while the C. cyanocephala at present stands alone in having a blue crown unaccompanied by the other characters. It is probable that another species, somewhat similarly coloured, will yet be discovered; indeed I already possess evidence that such will be the case, for I have a single specimen of a young male of some new species, the colouring of which, judging from analogy, tells me that, whenever the adult may be discovered, it will be allied to C. cyanocephala. Of the Cyanomyia cyanocollis no female has yet been sent to Europe; in colouring she will doubtless resemble the female of C Francice and C. cyanocephala. The figures are of the natural size. The plant is the Cantua bicolor. 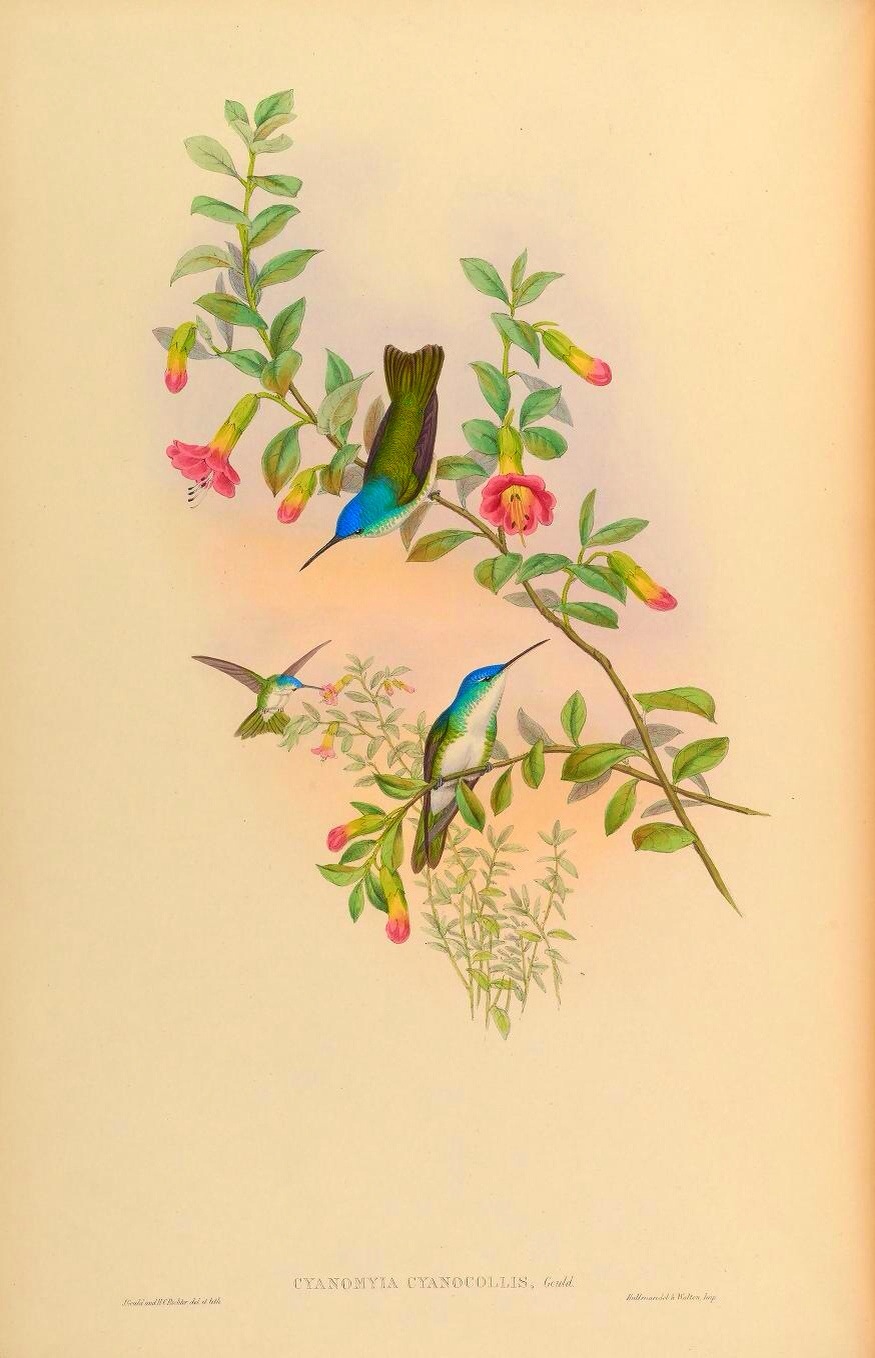 Crown of the head, sides, and nape of the neck greenish blue; upper surface bronzy green ; throat, centre of the abdomen, and under tail-coverts white; flanks bronzy brown; tail bronzy green, all but the two middle feathers crossed near the tip with an obscure dusky band; upper mandible and tip of the lower mandible black, the remainder of the latter fleshy white ; feet dark brown.