Source to all birds on the Planet
admin
Eurasia, Turdidae, vintage
Comments

The breeding-habits of the Fieldfare are only to be observed in the north and east of Europe ; for in every other part of the continent the bird is scarcely ever known as other than a winter visitant. It is fond of the neighbourhood of cultivated land, birch-woods, or those wherein birch and pine are mixed; and it sometimes breeds in colonies. Its song is poor, and is uttered by the male when on the wing; but its harsh cackling note is very loud: the call-note is a softer quiqui. When hopping on the ground it often jerks its tail and wings, but when sitting on trees only moves it tail.

The nests of the Fieldfare are placed in all kinds of situations, in birch, alder, pine, and other trees, in outhouses, in heaps of firewood or rubbish, at two or three feet from the ground, or, in the pine-woods, as high as sixty feet. They bear a general resemblance to those of the Blackbird (T. merula), and are composed of long, fine, dry grass, with a coating of mud or clay between the outer and inner layers of grass. This mud seems to be carried by the birds to the nest in the form of small round pellets, several of which we found hi a half-finished structure. A few nests have twigs of birch or other trees amongst the materials of the outer layer, others a few sprays of moss; but these are generally wanting. 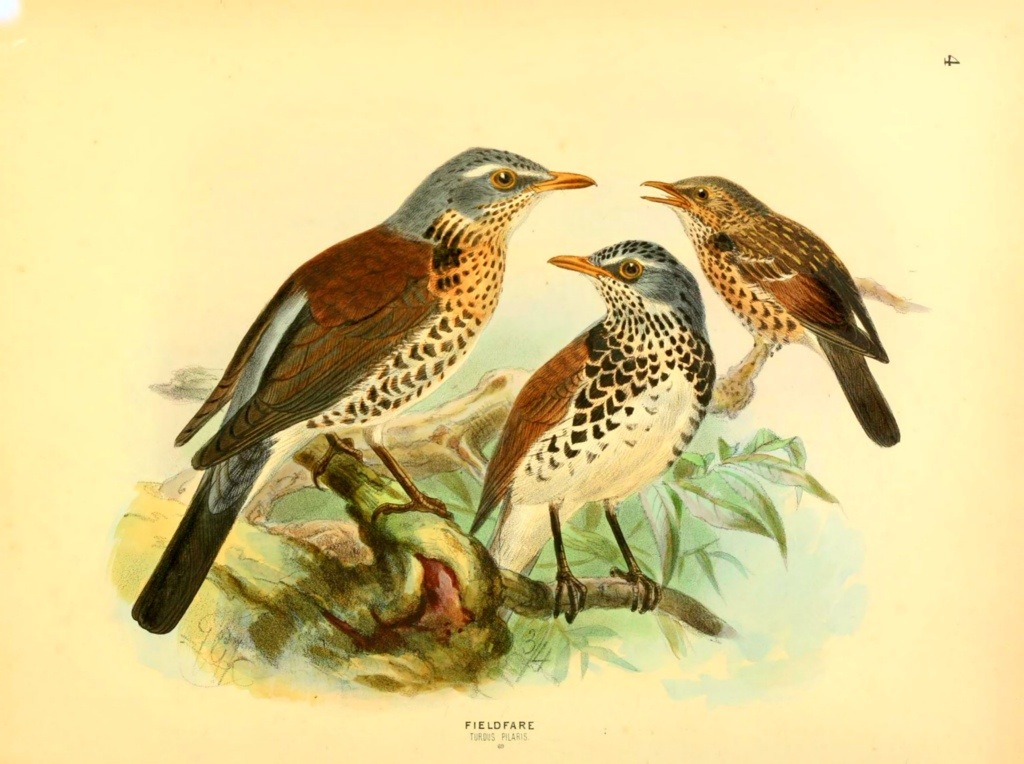 Adult in breeding-plumage. Head and hinder part of the neck ashy grey, the feathers of the former part blackish in the centre, producing a mottled appearance; centre of the back, scapulars, and wing-coverts dark chestnut-brown, the latter more or less washed with grey on the outer web, the least wing-coverts especially; quills dark brown, the shafts of the primaries blackish, of the secondaries brown; the primary-coverts and primaries externally washed with grey, inclining to white on the extreme margin of the feather, the secondaries also washed with this colour, but gradually becoming more and more shaded with brown, so that the dorsal ones are almost entirely of this colour; under surface of the wing greyish brown, inclining to silvery white near the base of the quills, entire lower part of the back and rump bluish grey, lighter than the head, the shafts of the feathers whitish; the tail-coverts also grey, but somewhat darker than the rump; tail blackish brown, the outer feather whitish at the tip, but when viewed on the under side the whole of the outer web, and the inner web for a quarter of its length, seem whitish; lores buff; eyebrow whitish; feathers in front of and under the eye black; ear-coverts ashy grey, with whitish shaft-stripes; a malar stripe ochre, with a few dark longitudinal markings; under surface of the body white; the throat aud upper breast rich ochre, the throat having a few black stripes in the centre, but the breast and flanks thickly spotted with black, owing to the centres of the feathers showing plainly; centre of the breast, and the entire abdomen, as well as the under tail-coverts, white, the latter broadly edged with grey on the outer webs of the feathers; under wing-coverts and axillary plumes white; bill entirely .yellow, excepting a little mark of horn-brown near the tip of the upper mandible; legs blackish, with a reddish tinge; iris dark brown.