Source to all birds on the Planet
Passeridae, Passeriformes
Comments 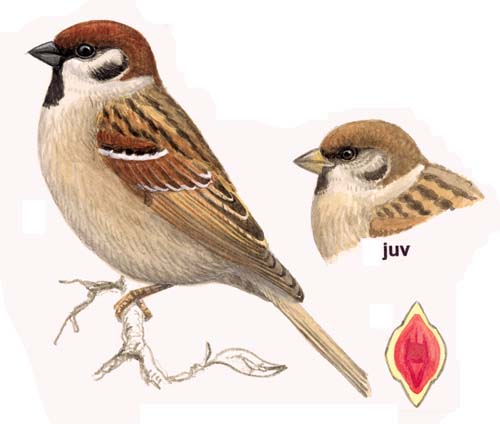 Smaller than house sparrow from which it can be told by a combination of rich brown crown, black cheek-spot and white neck collar. The sexes are indistinguishable. There are some unusual facets to this species, in Ireland it breeds almost exclusively in holes in old farm buildings, whilst in Europe tree-nesting is the norm. Tree sparrows largely shun higher ground in the British Isles, yet they breed at up to 4,400m in Tibet and, in the Far East, the tree sparrow is the common bird of towns and cities where it replaces the house sparrow.

Passer montanus is a widespread resident across much of Europe, which accounts for
less than half of its global range. Its European breeding population is extremely
large (>26,000,000 pairs), and was stable between 1970-1990. Although populations
were stable or increased across parts of Europe-particularly eastern areas-during
1990-2000, the species suffered widespread declines in western and north-west Europe,
and underwent a moderate decline (>10%) overall.

Listen to the sound of Tree Sparrow

Mostly nest in holes, and therefore found in mature wooded areas, or where cliffs or quarries provide suitable nest sites.

Considered to be a semi-colonial nesting species, the tree sparrow usually uses holes in old farm buildings to breed. Five or six eggs are laid around the beginning of May, with incubation lasting 12 to13 days. Fledging takes about two-and-a-half weeks and two or three broods per year may be raised. Whilst primarily a seed-eating species, invertebrates form an essential part of the diet of unfledged young.

This species has a large global range; the total size has not yet been quantified, but the Extent of Occurrence in Africa alone is estimated to be 48,000 kmÂ². It has a large global population, including an estimated 52,000,000-96,000,000 individuals in Europe (BirdLife International in prep.). Global population trends have not been quantified, but the species is not believed to approach the thresholds for the population decline criterion of the IUCN Red List (i.e. declining more than 30% in ten years or three generations). For these reasons, the species is evaluated as Least Concern. (source Birdlife.org)

Mainly sedentary, especially in west of range, with only small proportion undertaking relatively short-distance migration, mainly to south or south-west. Larger-scale autumn movements occur from time to time, particularly from more northerly parts of range. Numbers involved in these movements are subject to considerable fluctuations, forming irregular pattern that suggests eruptions rather than normal annual migration. Return movement in North Sea area occurs late March to May. Eruptive movements probably responsible for recent southward extensions of range that have occurred in 20th century in Corsica, Sardinia, and Malta, with some overwintering birds remaining to breed. Recolonization of Ireland after extinction in early 1950s probably arose in same way.
Distribution map breeding season

Title Spring temperatures and laying dates of first eggs of three passerines in Croatia
Author(s): Zdravko DOLENEC
Abstract: This study is based on the spring temperatures
an..[more]..
Source: Ardeola, 52(2), December 2005, 355-358