Source to all birds on the Planet
admin
Ciconiidae, folklore
Comments

The hero of the tale, Floria, having shown some kindness to a stork, who afterwards turns out to be the king of the storks, receives from him a feather, which when taken up at any time of danger would bring the stork to him and help him. And thus it came to pass that the hero, finding himself at one time in danger, remembered the gift of the stork. He took out the feather from the place where he had hidden it, and waved it. At once the stork appeared and asked Floria what he could do for him. He told him the king had ordered him to bring the water of life and the water of death.

The stork replied that if it could possibly be got he would certainly do it for him. Returning to his palace, the stork, who was the king of the storks, called all the storks together, and asked them whether they had seen or heard or been near the mountains that knock against one another, at the bottom of which are the fountains of the water of life and death.

All the young and strong looked at one another, and not even the oldest one ventured to reply. He asked them again, and then they said they had never heard or seen anything of the waters of life and death. At last there came from the rear a stork, lame on one foot, blind in one eye, and with a shrivelled-up body, and with half of his feathers plucked out. And he said, â€œMay it please your majesty, I have been there where the mountains knock one against the other, and the proofs of it are my blinded eye and my crooked leg.â€ When the king saw him in the state in which he was, he did not even take any notice of him. 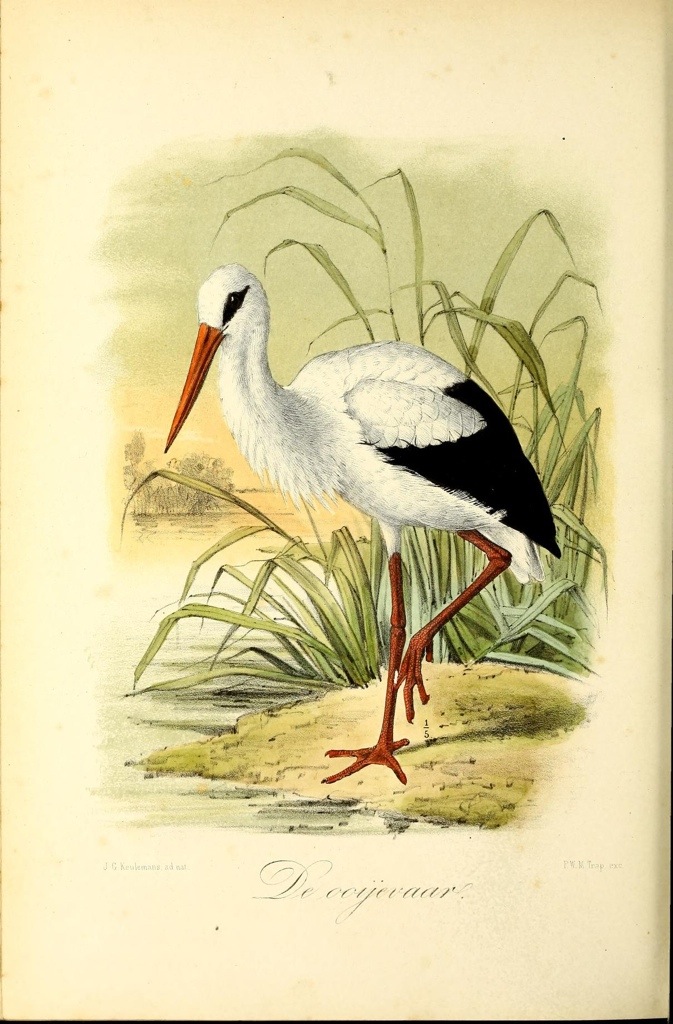 Turning to the other storks, he said: â€œIs there any one among you who, for my sake, will run the risk and go to these mountains and bring the water?â€ Not one of the young and strong, and not even any of the older ones who were still strong replied. They all kept silence. But the lame stork said to the king, â€œFor your sake, O Master King, I will again put my life in danger and go.â€ The king again did not look at him, and turning to the others repeated his question; but when he saw that they all kept silence, he at last turned to the stork and said to him:

â€œDost thou really believe, crippled and broken as thou art, that thou wilt be able to carry out my command?â€

â€œI will certainly try,â€ he said.

â€œWilt thou put me to shame?â€ the king again said.

â€œI hope not; but thou must bind on my wings some meat for my food, and tie the two bottles for the water to my legs.â€

The other storks, on hearing his words, laughed at what they thought his conceit, but he took no notice of it. The king was very pleased, and did as the stork had asked. He tied on his wings a quantity of fresh meat, which would last him for his journey, and the two bottles were fastened to his legs. He said to him, â€œA pleasant journey.â€ The stork, thus prepared for his journey, rose up into the heavens, and away he went straight to the place where the mountains were knocking against one another and prevented any one approaching the fountains of life and death. It was when the sun had risen as high as a lance that he espied in the distance those huge mountains which, when they knocked against one another, shook the earth and made a noise that struck fear and terror into the hearts of those who were a long distance away.

When the mountains had moved back a little before knocking against one another, the stork wanted to plunge into the depths and get the water. But there came suddenly to him a swallow from the heart of the mountain, and said to him, â€œDo not go a step further, for thou art surely lost.â€

â€œWho art thou who stops me in my way?â€ asked the stork angrily.

â€œI am the guardian spirit of these mountains, appointed to save every living creature that has the misfortune to come near them.â€

â€œHast thou come to fetch water of life and death?â€

â€œIf that be so, then thou must wait till noon, when the mountains rest for half an hour. As soon as thou seest that a short time has passed and they do not move, then rise up as high as possible into the air, and drop down straight to the bottom of the mountain. There, standing on the ledge of the stone between the two waters, dip thy bottles into the fountains and wait until they are filled. Then rise as thou hast got down, but beware lest thou touchest the walls of the mountain or even a pebble, or thou art lost.â€

The stork did as the swallow had told him; he waited till noontide, and when he saw that the mountains had gone to sleep, he rose up into the air, and, plunging down into the depth, he settled on the ledge of the stone and filled his bottles. Feeling that they had been filled, he rose with them as he had got down, but when he had reached almost the top of the mountains, he touched a pebble. No sooner had he done so, when the two mountains closed furiously upon him; but they did not catch any part of him, except the tail, which remained locked up fast between the two peaks of the mountains.

With a strong movement he tore himself away, happy that he had saved his life and the two bottles with the waters of life and death, not caring for the loss of his tail.

And he returned the way he had come, and reached the palace of the king of the storks in time for the delivery of the bottles. When he reached the palace, all the storks were assembled before the king, waiting to see what would happen to the lame and blind one who had tried to put them to shame. When they saw him coming back, they noticed that he had lost his tail, and they began jeering at him and laughing, for he looked all the more ungainly, from having already been so ugly before.

But the king was overjoyed with the exploit of his faithful messenger; and he turned angrily on the storks and said, â€œWhy are you jeering and mocking? Just look round and see where are your tails. And you have not lost them in so honourable a manner as this my faithful messenger.â€ On hearing this they turned round, and lo! one and all of them had lost their tails.

And this is the reason why they have remained without a tail to this very day.