Source to all birds on the Planet
admin
Corvidae, Cuculidae, folklore
Comments

The crow was in very great distress, for however she tried and whatever she did, she could not rear a family. No sooner were the young hatched, than the hawk would come and pick them up. In vain did she try to hide her nest in the hollows of a tree or in the thickets of a bush, as sure as death would the hawk find them and eat them.

Not knowing what to do, she bethought herself and said, â€œHow would it do if I try and get the hawk to be godmother, for then, being a near relation, she is sure to spare my little ones?â€ Said and done. She went out of her place to search for the hawk, and finding her, she said, â€œGood morning, sister.â€

â€œHow pleased I should feel,â€ said the crow, â€œif you would become godmother to my children.â€

â€œWith pleasure,â€ replied the hawk, â€œwhy not?â€ And so they made up a covenant of friendship and of good-fellowship between them.

Before leaving the hawk, the crow said to her, â€œNow, sister, I have one request to make.â€

â€œI only beg of you to spare my children, do not eat them when you have found them.â€

â€œAll right,â€ replied the hawk, â€œI shall certainly not touch [173]them, but tell me how they look so that in case I meet them I may spare them.â€

â€œO,â€ replied the crow, â€œmine are the most beautiful creatures in the world, they are more lovely than any other bird can boast of.â€

â€œVery well, rest assured. Go in peace.â€ And they parted. 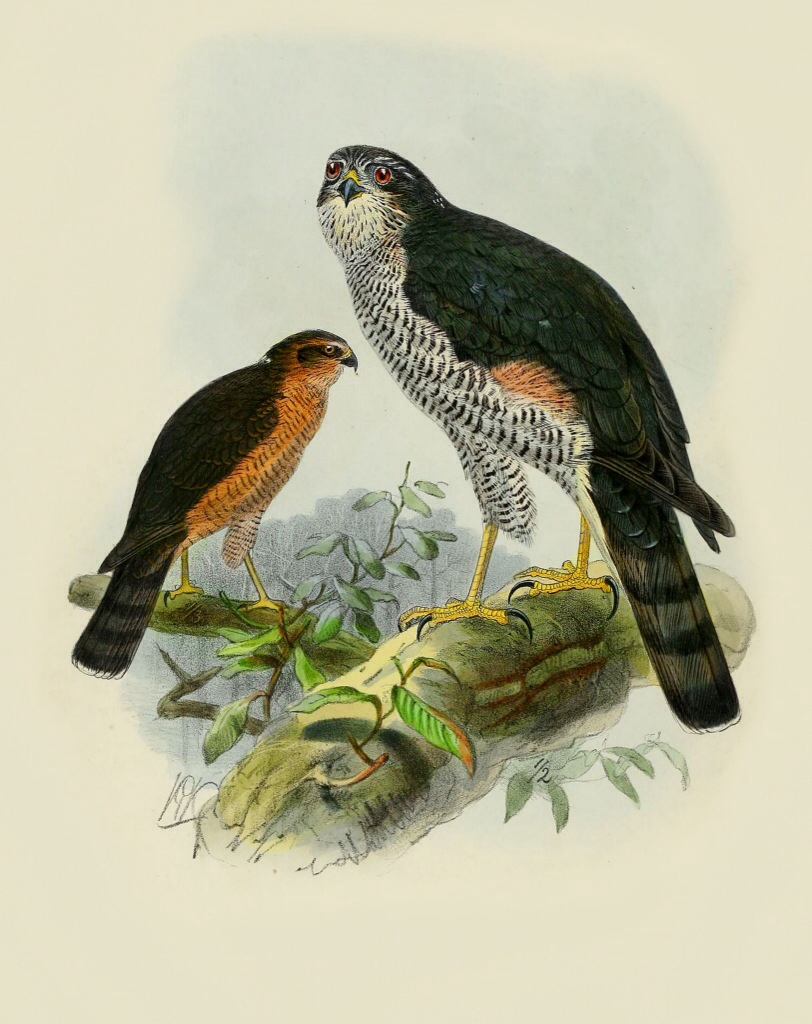 The crow, being quite satisfied with the hawkâ€™s promise, began flying about the next day trying to find something with which to feed her children. The hawk the next morning went about her own business and tried to find some nice little young ones to eat. Flying about, she saw the young ones of the thrush, the blackbird, and of other beautiful birds, and she said to herself, â€œSurely these are the children of the crow; look how lovely and beautiful they are, I am not going to touch them.â€

She went all day, without finding any little birds but these; and she said to herself:

â€œI must keep my word to my sister, I am not going to touch them.â€ And she went to bed hungry. The next day the same thing happened, and still the hawk kept her word and would not touch them.

On the third day she was so hungry that she could scarcely see out of her eyes. Roaming about, the hawk suddenly lighted upon the nest of the crow. Seeing the little, miserable, ugly things in the nest, the hawk at first would not touch them, although she never dreamt that these ugly things were the children of the crow, so much praised by her for their beauty, and thought they must belong to some hideous bird. But what is one to do when one is hungry? One eats what one gets and not finding anything better, she sat down and gobbled them up one by one, and then flew away.

Not long after the hawk had left, the crow came in, feeling sure this time to find her little ones unhurt; but how great was her dismay when she found the nest empty! First she thought the little birds had tried their wings and were flying about in the neighbourhood, and she went in search of them. Not finding them, she began to be a little more anxious, and hunting a little more closely, found on the ground near some rushes some tufts of feathers with little bones and blood. She knew at once that the hawk had again been there, feeding on her children.

Full of wrath and fury, she went to find the hawk. Meeting her, she said, â€œA nice sister and godmother you are! After you had promised most faithfully not to touch my children, no sooner had I turned my back on them, than you come again and eat them.â€

â€œI do not understand what you are saying,â€ replied the hawk. â€œIt is your own fault. You told me your children were the most beautiful in the world, and those which I have eaten were monsters of hideousness. If I had not felt the pinch of hunger so strong, I would not have touched them, not for anything, such ugly things they were! They nearly made me sick.â€

â€œIs that the way you keep your promise?â€ replied the angry crow; â€œafter having eaten them, you even have the impudence to tell lies and insult me. Off with you! and woe betide you if I ever catch you, I will teach you to behave properly.â€

From that day on, the hawk, if it gets near the crows, attacks them. And from that day on there is implacable hatred between the crows and the hawks.