Once, long ago, Old Man was travelling north along a river. He carried a great pack on his back. After a time he came to a place where the river spread out and the water was quiet, and here many ducks were swimming about. Old Man did not look at the ducks, and kept travelling along; but presently some of the ducks saw him and looked at him and said to each other, “Who is that going along there with a pack on his back?” One duck said to the others, “That must be Old Man.”

The duck that knew him called out, saying, “Hi, Old Man, where are you going?”
“I am going on farther,” replied Old Man, “I have been sent for.”
“What have you got in your pack?” said the duck.
“Those are my songs,” answered Old Man. “Some people have asked me to come and sing for them.”
“Stop for a while and sing for us,” said the duck, “and we can have a dance.”
“No,” said Old Man, “I am in a hurry; I cannot stop now.”

The duck kept persuading him to stop, and when it had asked him the fourth time, Old Man stopped and said to the ducks, “Well, I will stop for a little while and sing for you, and you can dance.”
So the ducks all came out on the bank and stood in a circle, and Old Man began to sing. He sang one song, and then said, “Now, this next song is a medicine song, and while you dance you must keep your eyes shut. No one must look. If any one opens his eyes and looks, his eyes will turn red.” 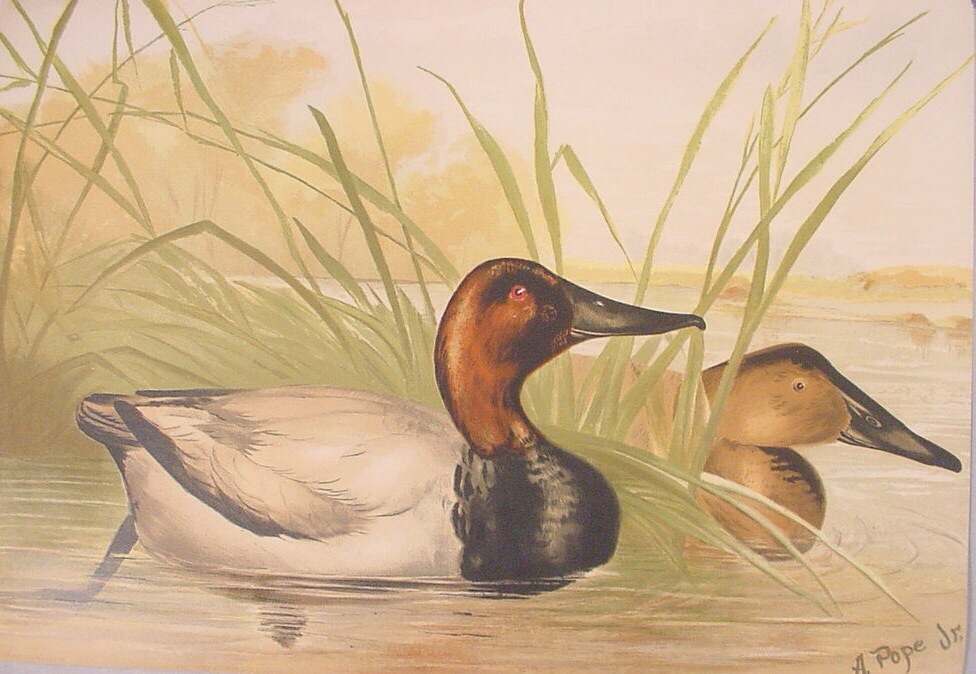 The ducks closed their eyes and Old Man began to sing, and they danced around; but Old Man took a stick, and every time one of them passed him, he knocked it on the head and threw it into the circle.

Presently one of the littlest ducks while dancing could not feel any one on either side of him, and he opened his eyes and looked, and saw what Old Man was doing. He cried out to the rest, “Run, run, Old Man is killing us”; and all the other ducks flew away, but ever since that time that little duck’s eyes have been red. It is the horned grebe.
Old Man took the ducks and went off a little way and built a fire and hung some of the ducks up in front of it to roast, and after the fire was burning well, he swept away the ashes and buried some of the ducks in the ground and again swept back the fire over them. Then he lay down to wait for the birds to cook, and while they were cooking he fell asleep.

While he slept a coyote came sneaking along and saw Old Man sleeping there, and the ducks roasting by the fire. Very quietly he crept up to the fire and took the ducks one by one and ate them. Not one was left. Pretty soon he found those that were roasting under the fire, and dug them out, and opening them, ate the meat from the inside of the skin and filled each one with ashes and buried them all again. Then he went away.
Pretty soon Old Man woke up and saw that his ducks were gone, and when he saw the tracks about the fire, he knew that the coyote had taken them.

“It was lucky,” said Old Man, “that I put some of those to roast under the fire.” He dug them up from under the ashes, but when he took a big bite from one, his mouth and face were full of ashes.