The eagle is the great sacred bird of the Cherokee, as of nearly all our native tribes, and figures prominently in their ceremonial ritual, especially in all things relating to war. The particular species prized was the golden or war eagle (Aquila chrystaetus), called by the Cherokee the ” pretty-feathered eagle.” on account of its beautiful tail feathers, white, tipped with black, which were in such great demand for decorative and ceremonial purposes that among the western tribes a single tail was often rated as equal in value to a horse. Among the Cherokee in the old times the killing of an eagle was an event which concerned the whole settlement, and could be undertaken only by the professional eagle killer, regularly chosen for the purpose on account of his knowledge of the prescribed forms and the prayers to be said afterwards in order to obtain pardon for the necessary sacrilege, and thus ward off vengeance from the tribe.

It is told of one man upon the reservation that having deliberately killed an eagle in defiance of the ordinances he was constantly haunted by dreams of fierce eagles swooping down upon him, until the nightmare was finally exorcised after a long course of priestly treatment. In 1890 there was but one eagle killer remaining among the East Cherokee. It does not appear that the eagle was ever captured alive as among the plains tribes. The eagle must be killed only in the winter or late fall after the crops were gathered and the snakes had retired to their dens. If killed in the summertime a frost would come to destroy the corn, while the songs of the Eagle dance, when the feathers were brought home, would so anger the snakes that they would become doubly dangerous. Consequently the Eagle songs were never sung until after the snakes had gone to sleep for the winter. 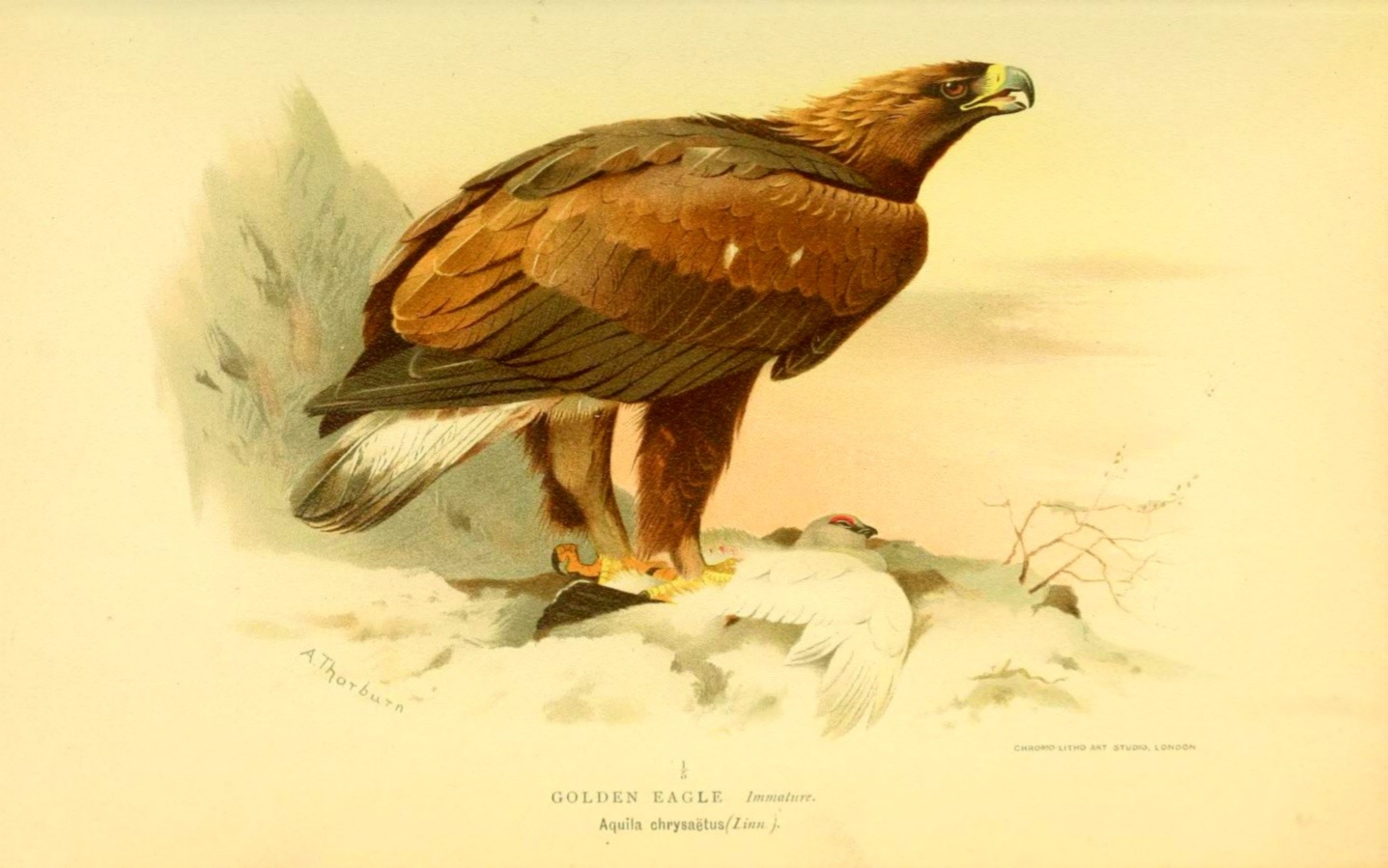 When the people of a town had decided upon an Eagle dance the eagle killer was called in. frequently from a distant settlement, to procure the feathers for the occasion. He was paid for his services from offerings made later at the dance, and as the few professionals guarded their secrets carefully from outsiders their business was a quite profitable one. After some preliminary preparation the eagle killer sets out alone for the mountains, taking with him his gun or bow and arrows. Having reached the mountains, he goes through a period of prayer and fasting, possibly lasting four days, after which he hunts until he succeeds in killing a deer. Then, placing the body in a convenient exposed situation upon one of the highest cliffs, he conceals himself near by and begins to sing in a low undertone the songs to call down the eagles from the sky. When the eagle alights upon the carcass, which will be almost immediately if the singer understands his business, he shoots it, and then standing over the dead bird, he addresses to it a prayer in which he begs it not to seek vengeance upon his tribe.

The prayer ended, he leaves the dead eagle where it fell and makes all haste to the settlement, where the people are anxiously awaiting his return. On meeting the first warriors he says simply. “A snowbird has died.” and passes on at once to his own quarters, his work being now finished. The announcement is made in this form in order to insure against the vengeance of any eagles that might overhear. After four days the hunters delegated for the purpose go out to bring in the feathers. On arriving at the place they strip the body of the large tail and wing feathers, which they wrap in a fresh deerskin brought with them, and then return to the settlement, leaving the body of the dead eagle upon the ground, together with that of the slain deer, the latter being intended as a sacrifice to the eagle spirits. On reaching the settlement, the feathers, still wrapped in the deerskin, are hung up in a small, round hut built for this special purpose near the edge of the dance ground and known as the place “where the feathers are kept,” or feather house. 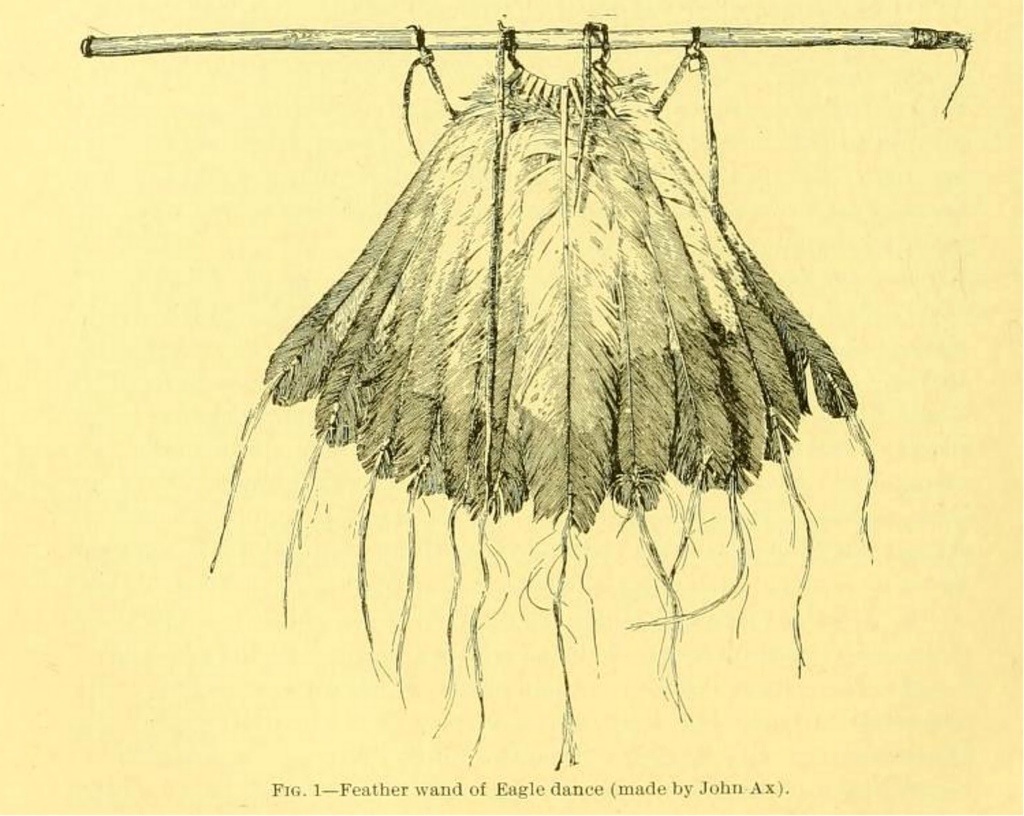 Some settlement had two such feather houses, one at each end of the dance ground. The Eagle dance was held on the night of the same day on which the feathers were brought in, all the necessary arrangements having been made beforehand.
The eagle being regarded as a great ada’wehi, only the greatest warriors and those versed in the sacred ordinances would dare to wear the feathers or to carry them in the dance. Should any person in the settlement dream of eagles or eagle feathers he must arrange for an Eagle dance, with the usual vigil and fasting, at the first opportunity; otherwise some one of his family will die. Should the insect parasites which infest the feathers of the bird in life get upon a man they will bring about a skin disease which is sure to develop, even though it may be latent for years. It is for this reason that the body of the eagle is allowed to remain four days upon the ground before being brought into the settlement.