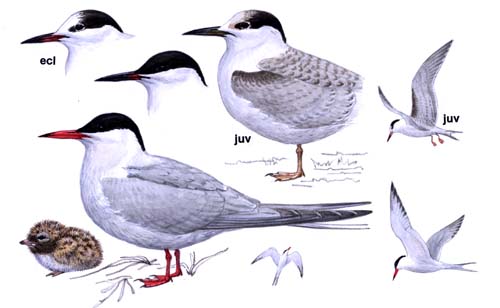 In breeding plumage, the Common Tern has an orange-red bill tipped in black and orange-red legs. The back, body, and wings are a silvery-gray with blackish primaries on the wingtips, evident during flight. The nape and cap are black and extend low enough on the head to contain the black eye before abruptly stopping at the white of the cheek and neck. The outer tail feathers on the forked tail are dusky. In non-breeding plumage the bill and legs lose their red coloration and are black. The cap no longer covers the forehead, leaving a white patch nearly to the top of the head. Distinguishable from Forster’s Tern (S. forsteri) by the Forster’s whiter underparts, lighter primaries, lighter back coloration (and, hence, less difference in color between back and tail), and greater amount of black on a bill that is more orange than red-orange.

This tern has a wide distribution in North America and Eurasia, where it is breeding from the Mediterranean coasts to northern Norway and from the British Isles to southern China and eastern Siberia. It inhabits indifferently coastal habitats and inland wetlands, but all European birds are wintering along the African coasts. The population of the European Union (12 Member States) is estimated at 40000 breeding pairs, which represents about 20% of the total European population. Following persecution, it has widely fluctuated in the past, but currently the populations have recovered and seem fairly stable. However, new threats are exhaustion of fish stocks by over-fishing, pollution by PCB’s and mercury.
Some populations in the New world, especially those in northeastern North America, have declined recently due to competition and predation from large gulls. Coastal populations have become more and more concentrated into fewer colonies. Some inland populations have also experienced decline.

Listen to the sound of Tern

Like all Sterna terns, the Common Tern feeds by plunge-diving for fish, from either the sea or freshwater lakes and large rivers. It usually dives directly, and not from the “stepped-hover” favoured by Arctic Tern. Sometimes also crustaceans and insects obtained at the surface of the water. A pair may defend feeding territory away from the nest, especially prior to incubation. The offering of fish by the male to the female is part of the courtship display.

Breeding starts at 3 to 4 years. Most nesting takes place in colonies, but some isolated pairs will breed as well. Both sexes help to make a shallow scrape in soil or sand, which they line with vegetation and other debris. Incubation of the 1 to 3 eggs lasts for about 3 weeks. After a few days, the young leave the nest, but stay nearby. Both parents help feed the young, which first fly at 3 to 4 weeks of age, but stay with the adults for another couple of months.

This species has a large range, with an estimated global Extent of Occurrence of 10,000,000 kmÂ². It has a large global population estimated to be 1,100,000-4,500,000 individuals (Wetlands International 2002). Global population trends have not been quantified, but the species is not believed to approach the thresholds for the population decline criterion of the IUCN Red List (i.e. declining more than 30% in ten years or three generations). For these reasons, the species is evaluated as Least Concern. (source Birdlife.org)

Title GROWTH AND ENERGETICS OF CHICKS OF THE SOOTY TERN (STERNA FUSCATA) AND COMMON TERN (S. HIRUNDO)
Author(s): OBERT E. RICKLEFS AND SUSAN C. WHITE
Abstract: We measured the energy budgets of chicks of the Co..[more]..
Source: The Auk 98: 361-378