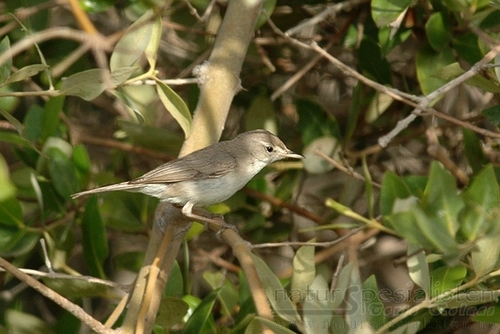 It is a small warbler, especially compared to others in their genus. They are pale brown (weak tea colour) above and whitish below with buff flanks. The outer tail feathers have pale edges. They have a short pale supercilium, and the bill is strong and pointed. Sykes’s is larger and greyer than Booted, and most resembles an Eastern Olivaceous Warbler.

Its breeding range is from northeast Arabia to Afghanistan.

Listen to the sound of Sykess Warbler

It is a small passerine birds are found in open country with bushes and other tall vegetation.

Nests are mainly of grasses, with some roots and strips of bark, and a base and outer edge of small twigs. With spider webs around the rim and lined with fine grass and/or vegetable down. It is build low above ground (0-2 meter) in a dense bush or small branch fork usually concealed by weed or leafs. 3-4 eggs are laid.

This species has a large range, with an estimated global Extent of Occurrence of 1,000,000-10,000,000 kmÂ². The global population size has not been quantified, but it is believed to be large as the species is described as ‘common’ in at least parts of its range (Roberts 1992). Global population trends have not been quantified, but the species is not believed to approach the thresholds for the population decline criterion of the IUCN Red List (i.e. declining more than 30% in ten years or three generations). For these reasons, the species is evaluated as Least Concern. (source Birdlife.org)

Like the Booted Warbler, many populations of the species migrate in winter to the Indian subcontinent as far south as Sri Lanka.
Distribution map breeding season

Title Will the real Sykesâ€™s Warbler please stand up? Breeding data support specific status for
Hippolais rama and H. caligata, with comments on the Arabian population of â€˜booted warblerâ€™
Author(s): PETER CASTELL AND GUY M. KIRWAN
Abstract: In early-January 2000, one of us (GMK) received a ..[more]..
Source: Sandgrouse 27 (1): 30-36 2005